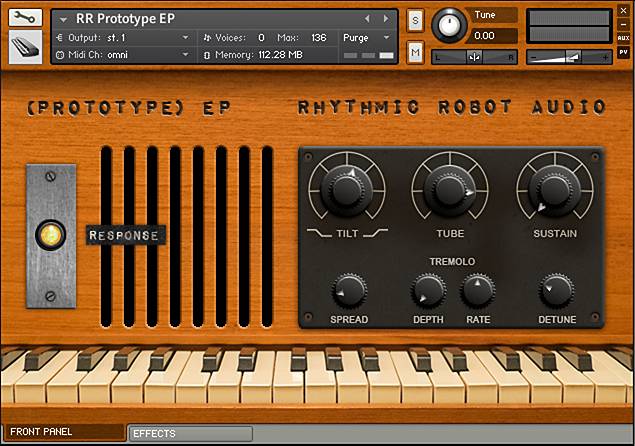 A thoroughly unusual electromechanical EP with a distinctive Claviset mechanism and crude control set • Perfect for roots rock, blues, honky-tonk dives, or adding a layer of strangeness to more conventional EPs • Over 480 individual samples capture every nuance of this strange instrument, warts and all • Retrofitted velocity response allows for expressive playing; Tilt EQ allows you to tailor the tone • Synthesised Sustain wave can be blended with the tines for a longer, fuller sound, and detuned for extra warmth • Key-off samples accurately capture the distinctive clicks, ticks and thunks of the tine bars in action

Electric pianos are just the coolest things: whether it’s the bark of a Wurli or the soulful drive of a suitcase Rhodes, we just love our EPs, and there’s hardly a musical genre out there in which they haven’t played a key part (ha… no pun intended.) But as usual, the ones that come built-in to most DAWs are a little on the polite side. We’ve decided to fix that. 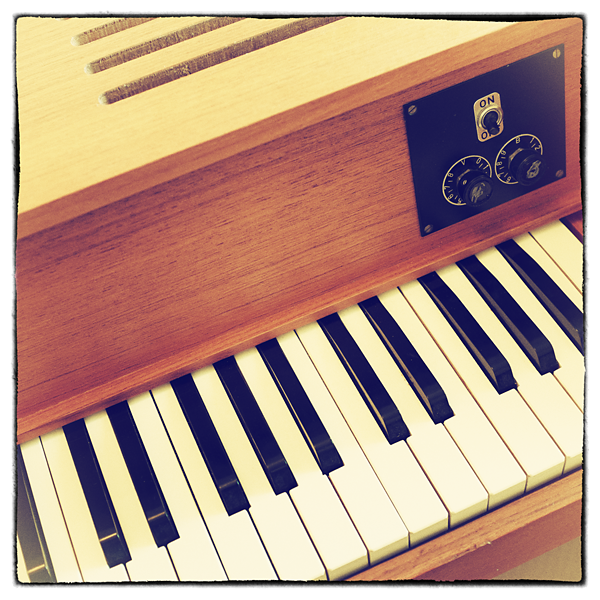 Prototype EP is a painstakingly sampled Weltmeister Claviset. Or at least, it may be. That part’s a little unclear. Let us explain…

Weltmeister were an East German company who released the Claviset in the early 1960s. It was very similar to the Selmer Pianotron and both instruments shared a quirky electromechanical design in which metal tines were plucked with little rubber plectra, and their sounds then captured by electromagnetic pickups. But while our source instrument conforms to the basic Claviset framework, the output stage, tone control, built-in amplified speakers and indeed the whole wooden housing are all something of a custom job. There’s no Weltmeister name on the bodywork and the typical Claviset rocker tabs which made it on to production models are nowhere to be seen, replaced instead by a single Tone knob and Volume control, driving twin speakers. The intriguing possibility is that this was an early prototype unit… hence the name 🙂

Prototype EP sounds like the electric equivalent of one of those bare-bones honkytonk pianos you might have found gracing the parlour of a frontier whorehouse back in the nineteenth century: erratic, raucous, badly-behaved, temperamental. The tuning is far from perfect (or stable); note-to-note buzzes, squeaks and rattles are all present and [in]correct; the clicks, ticks, scrapes and thunks that accompany the plectra dropping back into position have all been meticulously reproduced; and the result is definitely not polite any more. In short, don’t try to play a DX7 power ballad on this thing… but if you want to rock a bit of the Stones’ Brown Sugar you won’t go far wrong.

We’ve included some simple but powerful controls that allow you to create quite different moods with the base machine: Tilt EQ alters the balance of the tone from bass-heavy to tinkly and bright; Tube dials in some saturation for a nicely overdriven snarl; Sustain blends in a synthesised sustain tail that extends the notes rather nicely (and can be detuned if you wish, for a thicker sound). There’s also the vital Tremolo control, and Response simply allows the instrument to respond to velocity with lou 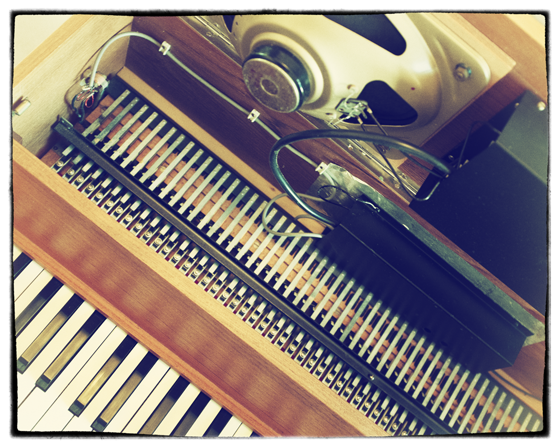 der and brighter tones, or – if you switch it off – keeps true to the original Claviset-style delivery. The various velocity layers that Response accesses were created by multisampling the hardware board at different settings of its onboard Tone control, so there’s a very organic transition from warm and mellow to bright and metallic; the various layers and round-robins we’ve employed also help the whole thing to breathe and behave in a suitably unpredictable way.

Round the back you’ve got some useful Effects, of which we warmly recommend a touch of reverb and chorus and have been happily surprised by how good the thing sounds through the rotary speaker, too.

The demo outlines a few of these options, from straightforward gritty blues-rock grind to strangely swooshy (but still characterful) blissout. The jazz segment at the end of the demo shows what Prototype EP sounds like layered with Logic’s own built-in electric piano – this, we think, works really well for giving the familiar Rhodes tonality of Logic’s offering a hefty dose of beat-up, rattly, real-world vibe. In this way, Prototype EP does for EPs rather what FadeWheel does for organs – roughs them up and makes them dirty!

If all you’re looking for from an electric piano is smooth Autotuned ballads, you probably don’t need this. But if your tastes drift into rock, roots, blues, bluegrass, folk, even reggae or early Motown-style soul, Prototype EP could be the secret weapon you need to give your keyboard parts a bit of grimy, authentic mojo.