A tiny Bakelite reed organ from the 1950s

“Its look and sounds are lifted from the Magnus Harmonica Corporation’s reed organs of the 1950s. Magnus is all about mushy, muddy sounds that can also get nasty when the saturation is cranked up!”– Sound on Sound magazine

Magnus is available at a special discount price as part of our Reed Organs bundle. See our Hot Deals page to grab this offer. 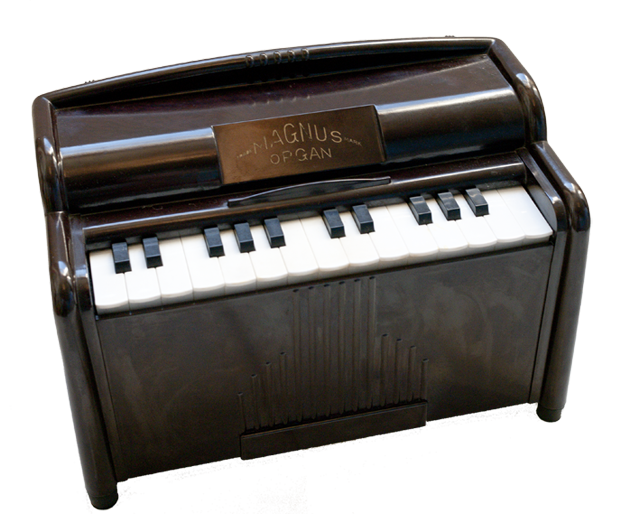 Take a trip back in time to the 1950s, when spaceships were shaped like proper rockets, scientists had proper hair, cars had fins and gills like some giant piraña fish, and the sound of the future was the Magnus Reed Organ.

This tiny box was built of Bakelite (the plastic of the future!) and crammed in a couple of octaves of teeny-weeny keys, plus an electric fan to drive air over its reeds. The sound it makes is like a big brown hug. It’s a one-stop shop for rich, thick organic pad sounds with a breathy tone.

Oh – and the smell of warming Bakelite is a joy. Lean closer… closer… there. Smell that? That’s the real deal, that is. 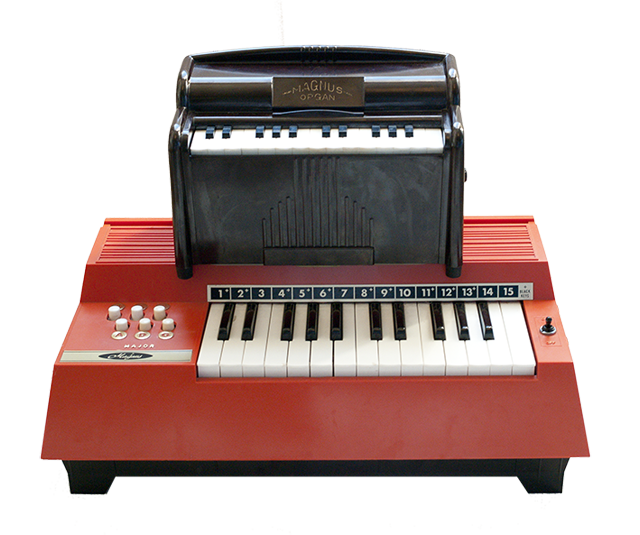 To make things a bit more versatile, we’ve also built into this model samples from another Magnus organ, this time from the 1970s. Things had come a long way by then. Keys were full size, fans were quieter, and brown was no longer the only colour: this Magnus was a big bold red plastic block. It looks like someone built it out of Lego. You should probably be thankful we didn’t choose to model the user interface on this one. In the photo here you can see little Magnus sitting on top of big Magnus: a bit like Keith Emerson’s keyboard rig from when he was a kiddie.

You can mix and match the two eras, blending the Bakelite and Plastic knobs to get the vibe you want. Tone rolls off the highs; Electrify kicks in a bit of tube saturation to heat up the sound; and the Attack and Release controls also model the pitch fall-off when the Release knob is set to longer times. 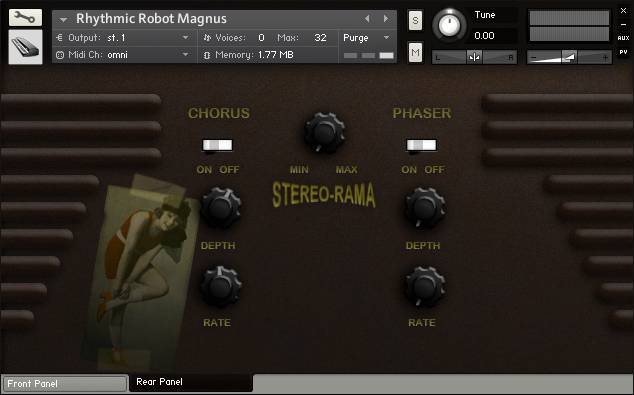 On the rear panel we have Chorus and Phaser and a racy pin-up to keep you on your toes. Hey, boys – looks like she’s taking off those socks! Hot diggetty!

Patent Pending Stereo-Rama widens the sound field in a way that would have boggled the minds of the boffins way back when (but which you’ll probably recognise as being… well… your basic stereo spread.) All in all you’ve got enough control here to generate some really cushy pads and chords, some weirdly lo-fi old-style organ styles, or organic, ethereal high-pitched soundscapes.

Magnus: a whole shedload of warmth in a tiny Bakelite box.