“The crazy tones of the hurdy-gurdy captured for Kontakt… A mad, evocative must-have for the esoterically-minded muso!” – Computer Music magazine

Meticulous recreation of an authentic, warts-and-all hurdy-gurdy for Kontakt • Multiple randomised round-robin attack squeaks, key noises and note sustains – no two notes are the same! • Individual control over the components of the sound to tailor the instrument’s articulation • Two drone strings, three main strings, with octave or unison modes

Hurdy Gurdy is available at a special discount price as part of our Hurdy Gurdy / Crank bundle. See our Hot Deals page to grab this offer. 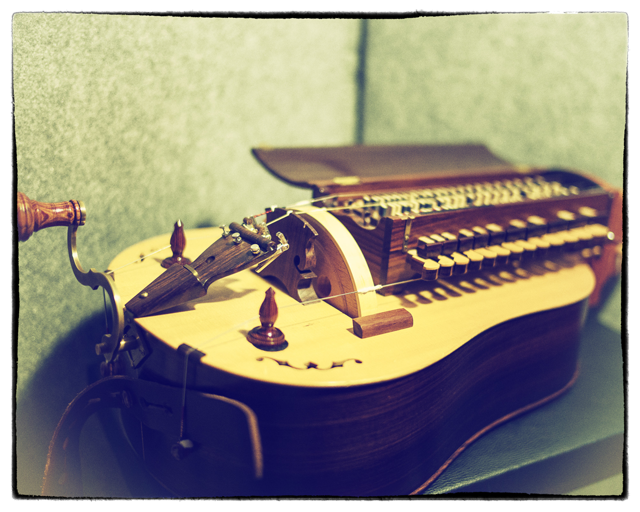 The hurdy-gurdy is a marvellous thing: a thrumming, resonating, buzzing box of sound, driven by a hand-cranked wooden wheel and a fistful of keys. It can sound brisk and cheerful or hauntingly plaintive; it can be driven hard to get a really raw attack to the notes, or eased back for a smoother and subtler effect. It’s complex and organic and wonderfully evocative.

It works by rubbing a rosined wooden wheel against violin-style strings, which include both fixed-pitch drones and playable melody strings, which are often tuned an octave apart. The drones can also sometimes be tuned (for example, to a perfect fifth) to add an open chordal accompaniment to the melody. A real-life hurdy-gurdy is a monophonic instrument – one note at a time, apart from the drones – but with ours you can choose to follow tradition or break with it and play chords if you like.

On the Effects pane there’s a very nice Reverb to give your sound a bit of breathing space, plus Chorus, Echo, Rotary Speaker and Amp Cab simulations in case you want to put your hurdy-gurdy through the equivalent of a guitarist’s pedalboard. Not very authentic, but good fun!

Hurdy-gurdies are notoriously fickle and wayward instruments. They simply don’t do pristine and precise. In fact, hurdy-gurdy players say that to play the hurdy-gurdy, you must spend two hours tuning it; and then one hour playing it… out of tune. Our Hurdy Gurdy is no different: we’ve made barely any attempt to disguise the excitingly uneven and erratic nature of the sound (okay, we tweaked the worst out-of-tune offenders, but generally what you get is the real deal, warts and all). The hand-cranked strings introduce periodic variations of tone colour and amplitude, and you can add your own, more deliberate, variation by using the mod wheel on your keyboard to control Hurdy Gurdy’s volume. This is a very intuitive way of making the instrument pulse and breathe just like a real player would, and after a bit of practice it becomes second nature to ‘ride’ the mod wheel rhythmically to simulate the turning of the handle. 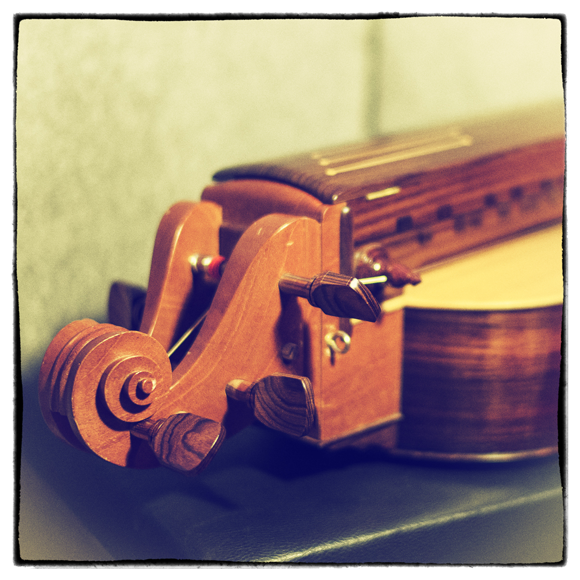 Hurdy Gurdy does two things to give you a great degree of authenticity. Firstly, it puts several important aspects of the instrument’s setup under your control. You can choose how many Drone and how many Main strings you want playing – for a simple, stripped-back sound or a fuller, richer timbre. You can also select between unison and octave Main strings. You also get a precise degree of control over the most characterful aspects of Hurdy Gurdy’s tone – the key noises and the attack ‘chirp’ that occurs when the pegs contact the strings. Key On and Key Off noises can be adjusted independently: setting these high will result in a very ‘clacky’ sound as if the hurdy-gurdy has been close-miked, while dialling them back helps simulate hearing the instrument at more of a distance. The attack ‘chirp’ or squeal is absolutely characteristic of the hurdy-gurdy and an integral component of its identity, but if you want you can lower this or even remove it, which results in a sound more like a folk fiddle or violin. This also lets you control the string tone with a good old synth-style ADSR envelope, in case you want to push Hurdy Gurdy into strange new areas (though if sound design is your thing, you may be interested in Hurdy Gurdy’s sister instrument, Crank.)

Secondly, Hurdy Gurdy does a lot of clever stuff behind the scenes to mimic the real article. Two entirely different sets of attack chirps were sampled for each note, one slurring down to pitch and one slurring up, since the hurdy-gurdy produces a distinctively different sound depending on whether you hit a key of a higher pitch than a playing note, or release a key to allow the pitch to drop back to a lower note. This kind of level of detail combines with a huge number of samples, cleverly randomised, to ensure that no two notes sound quite the same. (Each note draws on 20 different attack chirps, over a minute of sustained tone, and two hundred potential key strike and release noises!)

The end result is a triumph of crusty, uneven, tremulous, erratic beauty. This is an instrument with hundreds of years of heritage behind it: a folk musician’s magical box of sounds. Now it can bring its gypsy magic into your mix.