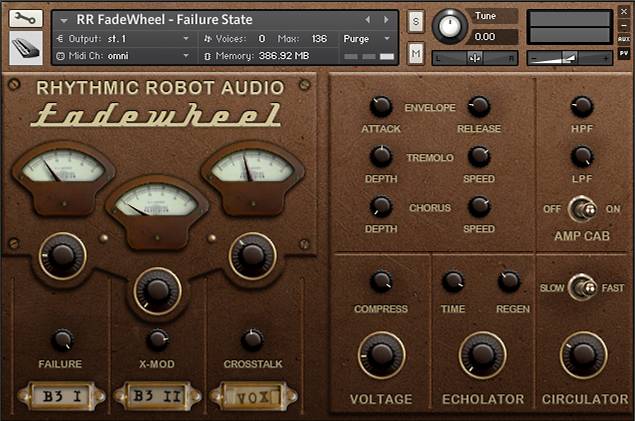 Two Tonewheel and one Transistor components, blendable for a wide spectrum of sounds from smooth and simple to harmonically complex • Crosstalk, Cross-modulation and Failure controls bring definable levels of grit, crustiness, erraticism and gnarliness to your tone • Takes standard organ patches deep, deep into the Dark Side 😀 • Ideal for unique organs, strange atmospheres, gritty leads, radiophonic textures and more

We’re big fans of tonewheel organs here in the lab – there’s something about that classic electromechanical swirl that just gets us in our gut – but our single biggest complaint about the otherwise great emulations currently on the market is that they all sound a bit clean. We always end up going to significant amounts of effort to get some real dirt and warmth going, and even then, sometimes the results aren’t as grungy as we’d like. Real tonewheel machines have history; they have a past; sometimes that past is pretty sordid and grimy. So why do the organ sims sound so shiny and new? What we need is organs with a bit of character.

FadeWheel takes that mission and runs with it. At its heart is a simple but versatile three-waveform organ engine, with two Hammond B3-type dials and a Vox dial. We chose these very carefully so that combining them yields a surprisingly wide spectrum of sounds. B3 1 gets you a pure, simple, fundamental-only B3 tone (based on an 808000 patch, for Hammondheads among you). B3 2 adds some nice harmonic overtones courtesy of the last three drawbars. And Vox is really fun: this is where you go for upper harmonic content, and pushing it can get pretty dissonant if you want. Plus, its transistor tone complements the tonewheel dials nicely.

But that’s only the start of the fun. FadeWheel is, after all, designed to add all that missing dirt and grit… and then some. Below the three waveform dials are the controls that really punch up the vintage vibe. Crosstalk adds in tonewheel leakage, to give a kind of B3-on-its-last-legs feel. X-mod cross-modulates the three main waveforms via an erratic, randomised waveform, giving an unpredictable, constantly-varying tone to your sound. And our favourite, Failure simulates total electronic collapse of the internal components of the organ: short-circuits, capacitor leakage, Warp Core breach, you name it; just dial it up and see what happens. (Good stuff. Good stuff is what happens.)

Keeping Crosstalk, X-mod and Failure at somewhere between 7am and 11am on their dials adds subtle but convincing ‘age’ to whatever tone you dial up with the waveform dials – you can vary the precise flavour of this dependent on which controls you push further. But at anything past 12 o’clock, you start to get really noticeable amounts of dirt and grunge colouring your waveform, and can take the whole deal into sound-design territory. In fact, it’s perfectly possible to create and play patches on FadeWheel using only the three ‘grunge’ controls, and leave the main waveform dials all set to zero!

To the right of the panel are some vital sculpting options. Attack and Decay knobs let you create swelling patches that trail away into dust and crackles; Voltage allows you to generate some harmonic distortion; Chorus adds some lovely stereophony and shimmer; there’s a Tremolo modulator for movement; and carefully-chosen Hi-Pass and Low-Pass filters let you tame the harmonics or smooth away the low-end. Use these together and you can get a band-pass, frequency-limited sound that is very typical of early recording apparatus: put that through the Amp Cab simulator and you’ve got yourself an early shellac 78 ready to play 😀 We have, of course, included the absolute necessity of a rotary speaker sim (the Circulator) but twinned it with a neat Echolator to give you some tape-echo-style options as well. An output compressor holds the whole thing together.

FadeWheel puts the grit and grime back into organ patches. If you’ve got a favourite modelled B3 but sometimes want it to sound a bit more aged (or even completely knackered), layer FadeWheel behind it and dial up some Failure and Crosstalk. Or if you want a pad sound that has recognisable tonewheel character, but pushes that character into a new sonic space, FadeWheel is the machine to reach for. For leads and solos it can scream and snarl; for textures and washes it can fade out and crackle away uncertainly in the background. It can even sound clean and pure… but why on earth would you want that?! 😀