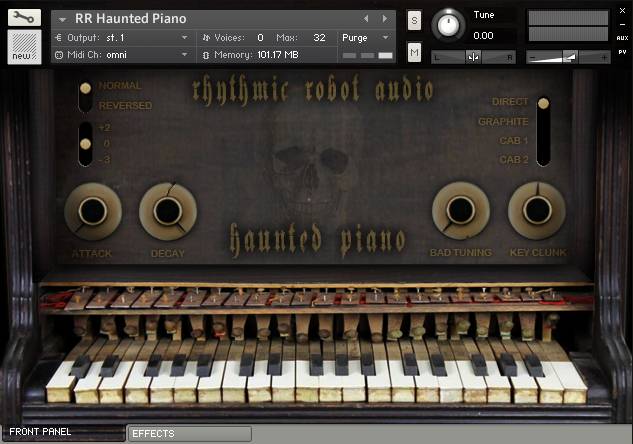 A toy piano… with a macabre twist 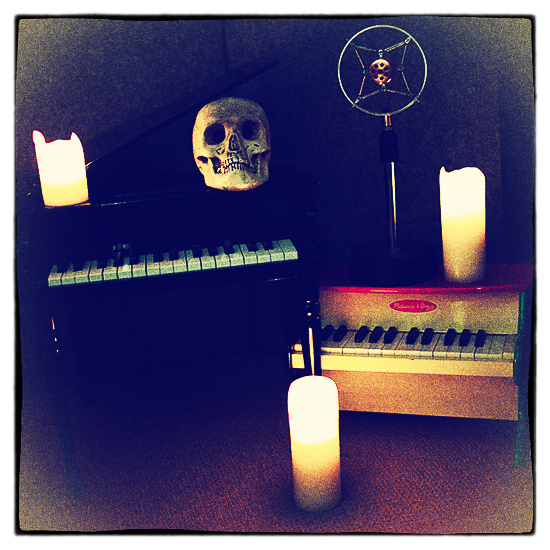 The thing about toy pianos is this: they’re scary. Just like a playground at midnight with one empty swing moving; or a rocking horse in a dusty, forgotten nursery suddenly creaking against the floorboard; or the doll whose eyes follow you from across the room.

Don’t turn your back on them.

Haunted Piano is created from multiple samples of two toy pianos which between them span a full three octave range. We sampled them at midnight, by candlelight, when the moon was full (and at 24-bit, natch). Using three velocity layers and two round robin sets, we created an eminently playable and responsive virtual toy piano, which can sound just as clunky and naive as the originals.

But then we went a bit further down the spookiness path, pushing the sound of the virtual instrument into sound-design territory. The samples can be reversed with the click of a button, to give eery builds and surprise tones, or to recall those “backwards masking” moments so favoured by demonic rock bands. They can also be force-transposed down by three octaves for groaning, bottom-of-the-sea, sepulchral noises and cavernous drones; or pitched up two octaves for tiny, sparkling fairy-bell sounds that glitter and gleam.

The base sound covers a five-octave span in the middle of your keyboard, the middle three octaves of which are chromatically sampled. But the fun doesn’t stop there. At the top of the MIDI key range we’ve crammed in 75 further sounds made by the toy pianos under duress – when we tipped them over, shook them, dropped them, creaked their lid hinges, rattled their keys or otherwise abused them. These sounds are mapped across two octaves and three fixed velocity layers for easy access within your DAW, and comprise a wide range of effects noises, sound-design starting points and other sonic goodness. They, too, can be force-transposed down or up, allowing them to be used as everything from apocalyptic thunder sounds to splintery little percussive details.

Attack and Decay controls allow you to mould the base sound a bit, while Bad Tuning does what it says on the knob and lets you add a touch of drift or a full-on dose of threatening unpleasantness for cacophonic, atonal moments. Key Clunk controls the level of the 50 key-off samples, which are selected randomly and which add a great degree of realism to the sound.

The rear panel offers up two specially selected effects: echo (which is, of course, the scariest of the effects groups) and reverb (for getting that dark-mass-in-the-cathedral-crypt spaciousness to the sound). On the front panel, meanwhile, you can switch between two amp cabs and a convolved graphite microphone to change the colour and tonality of the sound. The graphite mic in particular sounds excellent on this instrument – you can see it in the photo above and hear it on the demo track in several places.

Haunted Piano fills two main roles: played straight, it offers an extremely realistic and convincing toy piano instrument, while with some of its more esoteric options enabled it provides a range of organic sound design textures that work in all kinds of musical styles, particularly those with a tendency towards the Dark Side.

Just don’t feed it after midnight…