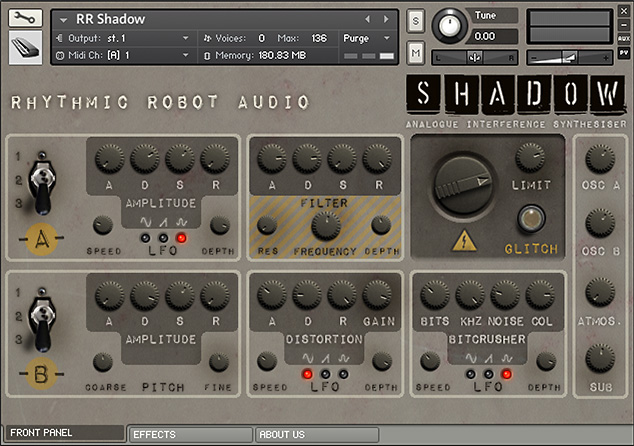 The Soma Labs Lyra 8 is a small but astonishing bit of engineering: an “organismic synthesizer” that reacts and interacts in unpredictable, organic ways. Its eight voices can be induced to interfere with each other and the waveforms it produces can be engaged with fingertip capacitance, which can lend them a peculiarly hesitant, uncertain quality. While it’s possible to tune its input contacts in such a way that you can play within a musical scale of sorts, or play a chord using multiple contacts, its real strength lies in producing weird, powerful atmospheric dronings… which is what very much took our fancy. 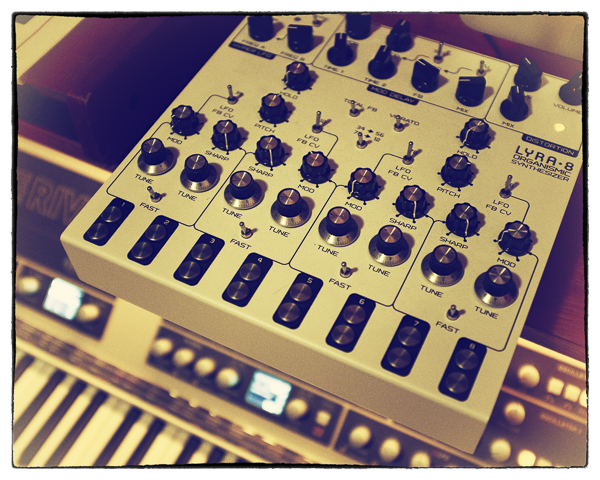 Shadow takes Lyra 8 source waves as its oscillators. We spent many happy hours first creating these waveforms and then “performing” them from the Lyra, introducing as much instability and, um, organimicism as possible. Knobs on the hardware were randomly moved; the capacitance contacts were tapped, scraped, brushed with fingers rather than held; the onboard LFOs were adjusted in real time to produce varying and chaotic results. Each waveform was sampled for over a minute, their start-points are randomised every time you press a key, and there are 36 separate waves spread out across the instrument’s range – which means that in practical terms, no two notes are ever quite the same. On top of all that, each of Shadow‘s two oscillators can be doubled or tripled with the flick of a switch – which makes creating deep, dense swathes of sound extremely easy (and addictive).

While we’ve corrected the most severely wonky tuning, we made a deliberate decision with Shadow to allow pitch instability to play a part in the waveforms, so there’s a lot of natural detuning going on even before you start to play with the oscillator Fine Pitch knob or the additional oscillators. In short, it sounds huge. But that’s just the start. Bolted onto the analogue source waveforms is a bank of brutal sound-mangling mayhem, courtesy of a Distortion block and a Bitcrusher module. Both of these have seen service in our distortion-based synth, Uproar, and serve to take the Lyra’s waveforms and damage them in increasingly interesting ways. Since both Distortion and Bitcrusher have their own LFOs, there’s enormous scope for cyclical, undulating changes to the entire fabric of the sound; and things can get stranger still if those LFOs are set to Random mode. If your idea of a good time is dialling up an endlessly-unfolding wall of musical chaos then, well, this is going to please you. 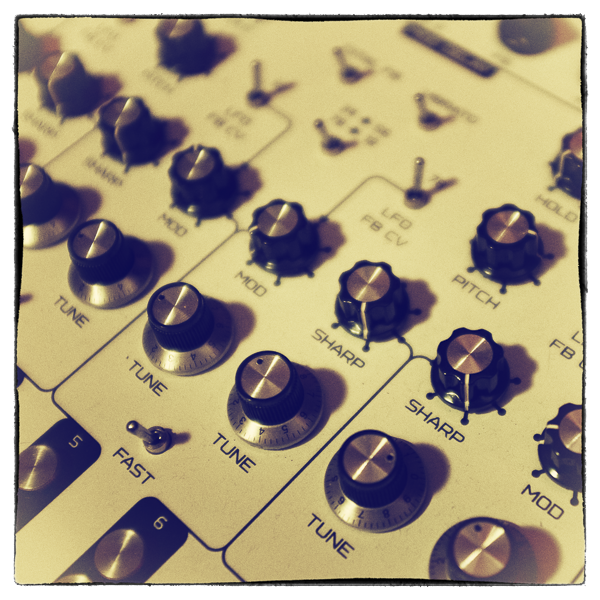 A Filter circuit helps smooth and tame things if you want, or resonate them into oblivion if that’s more your thing. A global Saturation knob grinds the whole sound even further into the red. Atmospheric shortwave static serves as a noise source. And a chunky sinewave sub-oscillator adds beef if you need it. Round the back, on the rear panel, there are all kinds of cool effects, including our convolved Icon Reverb, featuring vintage Lexicon patches plus some very choice Spring Reverb machines.

Finally, because we know it’s everyone’s secret favourite, the Glitch Control has pride of place. Punch this and a new, musically-randomised patch is created instantly. If you haven’t tried this before, it’s just the funnest little yellow button of all time. Mongo stabs away at it like a Skinner pigeon trying to get a treat (and the nice thing is, treats come quite often with Glitch).

Big and graunchy, sometimes brutal, sometimes gossamer-thin… Shadow is here to take you to strange places. But we think you’ll enjoy the journey.