The hidden music of the airwaves

“The interface is deep and powerful, and the drones and ambiences you can come up with are seemingly limitless.”  – Computer Music magazine

“Shortwave sounds amazing… Thanks so much, and keep creating inspiring stuff”

These are noises harvested from the amazing sonic resource that is shortwave radio. Many of these noise sources could become energising backdrops for your otherwise pristine, in-the-box musical output”  – Sound on Sound magazine 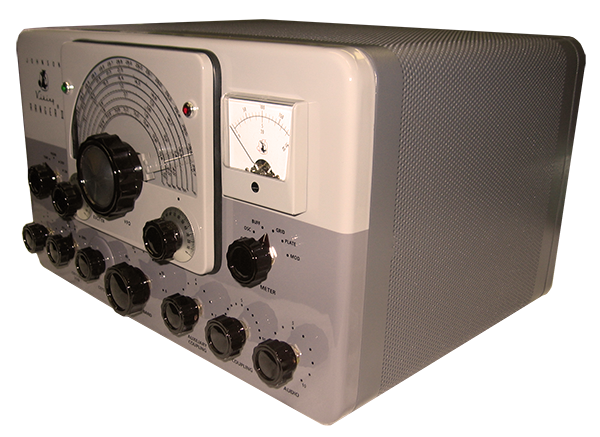 Somewhere out there in the night sky, lurking between the signals, are the real sounds of shortwave radio: the tuning squeals and howls; the strange, pulsing, stuttering waveforms; the cyclic, droning hums; the hiss and roar and crackle of cosmic radiation hitting the ionosphere. They have a strange and compelling power, calling to us, luring us further and further out…

And then there are the disembodied voices, auditory glimpses of ham radio operators in dusty attics, forgotten cold-war numbers stations broadcasting codes to embedded spies, late-night broadcasts from a hundred countries all vying for a scrap of bandwidth to call their own. We’ve sought them out and brought them home.

Shortwave is a chaotic, randomised, unconventional soundscape-generating synthesiser. It allies a four-operator additive synth engine based on analogue, unstable sine waves to two “interference generators” that bring the power of the uncharted shortwave spectrum to bear on your sounds. It excels at unusual, drifting, evolving textures, pads infused with the background hiss and atmospheric static of the aether, and cinematic ambiences that pull you away from the normal and out into the upper atmosphere. It’s a strange beast, that’s for sure.

Shortwave patches are built from two key sections. First of these are the four Sine generators: one Fundamental and three Harmonics. These can be adjusted in pitch and level relative to each other, increasingly randomised using dedicated random LFOs, or locked to cyclic variations imparted by the Periodic Fluctuation generator, which acts as a master LFO across all the sines. The Fundamental can be distorted, giving it further triangle-wave-style overtones, and by carefully tuning the Harmonic waves, a crude approximation of different classic synth waves can be managed. 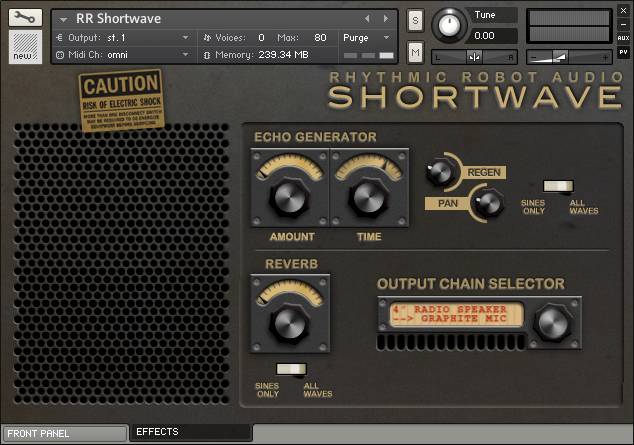 But to treat Shortwave as a conventional synth is to miss the fun part. The second section of its sound generation engine comprises the two Interference Generators. Each of these selects between 111 long, looped samples of “interference” – everything from basic hiss and noise, through periodic, cyclic effects, to tuning squeals and shrieks; voices, numbers stations, and Morse code signals; distorted carrier waves, strange atmospheric anomalies, and other tonal weirdnesses. These can be blended into the sound, and subjected to their own Randomisation controls, which randomly vary their amplitude independently of the Sines, fading them in and out of the range of hearing in a totally organic way. These long samples – usually between 20 and 30 seconds each – have randomised start points, so repeated notes will key the sample from a new point each time, adding further to the complexity and non-repeating character of the waveform.

The majority of the 111 Interference waveforms were recorded by us, in an attic, with a 60-foot antenna loop and a real-life shortwave receiver, over a series of long nights where we searched for the strangest things the airwaves had to offer us. We found genuine, functioning numbers stations, cranking out spy code in robotic voices with Russian accents; we stumbled through CB radio conversations and Marxist governmental propaganda; we heard voices from the far sides of the world. It was magical. Some of these samples are presented unaltered, and some were high-pass filtered to take out the rumble (look for the HPF note in their Interference Generator names). Then we also recorded a set of samples from our ever-growing modular synth, getting “pure” white and pink noise, and roping two Manhattan Analog MA-35 analogue filters together with two Doepfer random CV generators and making them fight it out. The resulting squeals, howls and groans are there for the taking too, though they’re labelled in green to distinguish them from the authentic radio waveforms, which are listed in black. (In the main screenshot above, there’s one genuine shortwave radio sample that’s been high-pass filtered loaded into Interference slot 1, and a modular version of static noise in slot 2.)

Lurking in the top right-hand corner of the UI is our neat little Glitch button: your one-stop shop for new inspiration. It’s a “musical” randomising control, which means that clicking it randomises the whole interface, generating an entirely new sound – but with a bit of clever maths predisposing the randomising towards “musically useful” results. (For example, the Glitch command only randomises the Fine tuning controls every once in a while; so most of the time, the patches it generates will be musically harmonious… broadly speaking.) Clicking away at the Glitch control tends, in our experience, to yield something genuinely useful and inspiring pretty often – once every 10 clicks or so is our guesstimate – and it’s a great way to take your sound design in an unthought-of new direction, or break a creative block.

Finally, round the back, we have some ear candy to bring your patches to life still further. The Echo Generator can produce conventional echoes, or be tuned ridiculously tight for more mechanical, ringing, distorted effects. The Reverb control patches in a custom convolved Plate reverb sample. Both of these effects can be applied to the whole sound, or just the Sine operators, which usually yields a more musical result (most of the time, echoing and reverbing up the Interference Generators just results in a noise-roaring mush of sound… though sometimes that’s what you want!)

The Output Chain selector harnesses eight combinations of speakers and microphones, ranging from full-range studio monitors and condenser mics through to nasty little 3-inch radio speakers and a wonderful old-school graphite mic (the same technology that powered the telephones of forty years ago). This is where you can take those full-range Sines and make them sound like they’re coming from a battered old Radio Shack receiver.

All in all, Shortwave is a strange, wonderful, sometimes unnerving, sometimes ethereal addition to your synth arsenal. It can surprise and captivate you, moving from raw, crackling energy one moment to distant, shifting echoes the next – just like tuning a shortwave receiver! As a source of pads, washes and drones, it’s pretty much guaranteed to out-weird any other synth. Shortwave – time to go on the air…