Buying Loopscape Vinyl entitles you to get its sister product, Loopscape, for half price! See our Hot Deals page to grab this offer.

“With three loops combined, the result is a lush and dense synthesiser sound, evolving and transforming constantly… it’s incredible.” 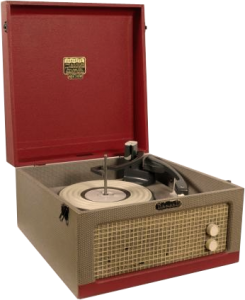 Our original Loopscape took irregular, uneven strips of audio tape and looped them in a synthesiser framework, turning Brian Eno-style “incommensurable” soundscapes into a programmable, tweakable musical machine. Though we say it ourselves, it was pretty damn cool, spewing out weird, evolving, complex drifts and washes almost no matter what you did to it. Sound on Sound magazine said it was “dripping in oxide… you can almost taste the wow, flutter and print-through”. Well, now it’s time to taste the hiss, crackle and warp, because Loopscape is reborn – only this time, we’ve ditched the spools and reached for the platters…

Loopscape Vinyl starts with a host of entirely new recordings of classic synth waves: two ballsy sawtooths (one with a sub-oscillator) from our modular system, a smooth triangle from the Roland SH7, a gritty pulse wave from a Yamaha CS30, and a nice mellow sine. All of these were recorded in pristine quality, and then sent off to be pressed to a series of custom vinyl dub plates. Once we had our lovely new vinyl LPs back in the lab, we set about sampling the waves straight off the vinyl. And that’s where “pristine quality” and “high fidelity” went right out the window.

The whole fun of the original Loopscape was that it wasn’t clean, clear and precise – it was wonky, creaky and wobbly. Loopscape Vinyl carries on that proud tradition. Our turntable wasn’t reference-grade. In fact, it was a Dansette from the early 1960s. Our records weren’t wiped carefully with that little furry brush and put back in their sleeves after use, held only by the edges. In fact, Mongo may have dropped them down the stairs, and I may have “accidentally” spilt a beaker of Telecaster bridge screws and machine heads on some of them, leaving some unpleasant dings and scratches. There may have been dust, and grit, and some judicious application of a hair-drier. All in all, these aren’t going to win any awards for audio precision. What we were going for was the kind of sound you might get from an Optigan… if it had been reinvented as a synthesiser… built in the 50s… and then not-very-well maintained for half a century. In short, a bit of a relic. 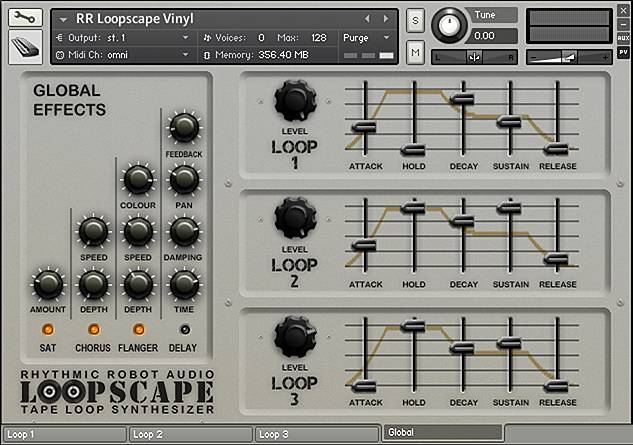 The result is a collection of looping audio waves with some serious attitude and character. They’re gritty; they snap, crackle and pop more than a bowl of breakfast cereal; the loop points aren’t disguised so much as celebrated. With three different-length loops of between half a second and seventeen seconds up and running, plus a host of LFOs and other periodic fluctuations at your disposal, you can craft endlessly-changing, never-to-be-repeated soundscapes that are stamped through with the subliminal nostalgia of vinyl. There’s just something about the sound of a real record on a real turntable  with real scratches and crackles that brings a synth wave alive; and here, that vinyl DNA is built right into the synth itself. We even created the Noise wave by mixing endstop crackle with the sound of the Dansette’s stylus being scraped along the record edge – so it’s rather more unusual than standard white noise!

Loopscape Vinyl is not a precision instrument. Don’t expect cutting, clinical sounds from it: in fact, don’t expect two consecutive notes to sound the same, cos they won’t. What it is is a great way to get warmth, instability, movement and “incommensurability” into your tracks: it excels at pads, washes and background drifts, odd synthscapes, weird sound-design and generally all manner of vintage-style strangeness, all with that unmistakeable stylus-in-a-groove character. If you’ve been looking for the antidote to the modern digital “in the box” sound, you just found it.