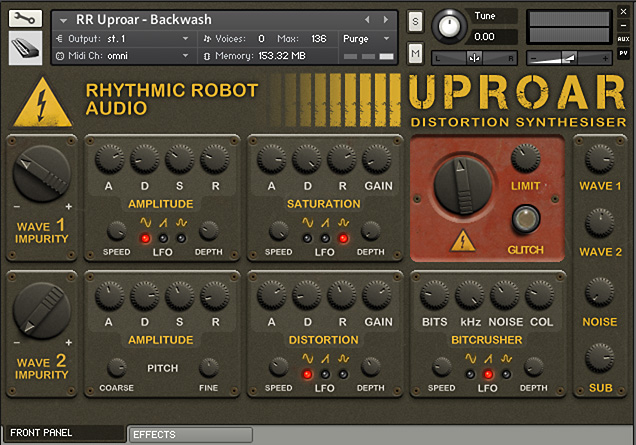 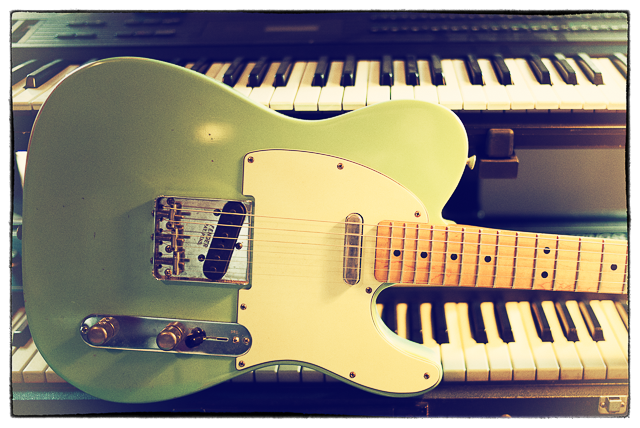 Uproar takes the classic subtractive synth architecture, turns it on its head, beats it up and calls its mother nasty names. The principle behind it is simple: instead of taking a complex, harmonically-rich waveform and progressively filtering it, Uproar starts with smoother waves and progressively distorts them – messing them up with saturation, distortion and bitcrushing modules until they reach whatever point of complexity you want. In doing so, it imparts a whole new character to ‘typical’ synth tones, and drifts easily into territory that a typical subtractive synth can’t really reach.

Uproar uses as its starting point two waveform generators. Because these are the cornerstones of the sound, we’ve given you a lot of scope right here. The Impurity dial blends between a pure analogue sine-wave and a far more complex, uneven waveform that we created by eBowing the strings of Mongo’s Telecaster. An eBow is a little doohickey which uses an oscillating magnetic field to stimulate a guitar string directly – no plucking required – and using it yields an infinitely-sustaining but pleasantly erratic tone that we sampled for over a minute for each note, randomising the start points so that no two notes you play sound quite the same. With natural detune between the sine and the eBow waves built in, each wave generator gives you a lot of character right from the off. 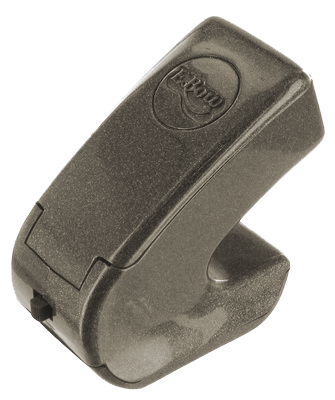 But it’s the next bit that’s really fun. Instead of giving you filters and filter envelopes, we give you distortion, and distortion envelopes. Distortion amounts, drive levels, even bit depths, are all under the control of ADR envelopes and freely variable LFOs, so you can create pulsing, monstrous, progressive, evolving sounds with really cool cyclic distortion effects. Running Wave 2 through its bitcrusher and tying in an LFO will cycle from 1 bit to 16 bits at whatever speed you like; combining that with a gritty Distortion circuit that’s slowly building its gain over a nice slow Attack creates all kinds of exciting sonic mayhem. Then layer in Wave 1, add some Noise, and if the result needs a bit more low-frequency power, why not dial up the Sub oscillator? When you’ve got something that sounds cool, drive it even further into the Dark Side with the master Drive control (that’s the big knob in the red panel) and limit the output to glue the whole thing together (and protect your eardrums).

Uproar excels at aggressively powerful tones: dial everything to the max, and you’re straight into snarling monster-rock territory, with sounds that have a distinctly electric-guitar edge and can cut through a mix like an acetylene flame through butter. But perhaps surprisingly, this raging machine can turn its hand to softer, subtler, atmospheric sounds too; and what’s neat about these is that they sound distinctly different to similar patches created in the traditional subtractive manner. Because there are no filters to remove the high frequencies, Uproar tends always to have a sheen of air over its sounds (and you can really accentuate that with a gentle reduction in Wave 2’s bit depth). This lends it a unique, breathy sonic fingerprint that can work wonders on otherwise ‘trad’ synth sounds, beds, washes, and textures. If you want your patches to stand out from the crowd, this is a great way to achieve a very different signature sound.

In terms of control, you have full ADSR amp envelopes for the two base waveforms; Wave 1’s amp envelope also controls the Noise and Sub-oscillators. Wave 1 runs through a Saturation circuit and thence to the master Drive control and the output limiter. Wave 2’s signal path starts similarly but then progresses through a much more aggressive Distortion module, and a Bitcrusher. All the distortion circuits – Saturation, Distortion and Bitcrusher – have LFOs and ADR envelopes so that they can impart their own movement and evolution to the sound. Hearing a cyclic pulse of saturation sculpting a raw sine wave is really very satisfying 😀 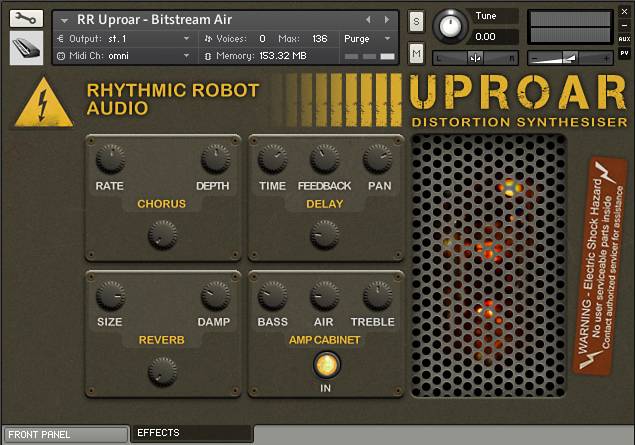 Round the back we have Chorus, Reverb, Delay and a hand-picked Amp Cabinet simulator, which compresses and contains Uproar’s sound and gives it a more vintage vibe. This can help embed Uproar in a mix more easily: it gives a more traditional vibe to the sound, though it also dials back some of the characteristic high-frequency energy that gives Uproar its sheen of air. Try it for more classic mixes, though, and it might be exactly what you need.

Finally, there’s a nice big Glitch button right there on the front panel so you can musically randomise the whole machine with one click – generate tons of unique, personalised patches by Glitching away and seeing what happens! Be warned – this is utterly addictive.

Uproar is built from the ground up to be experimental in all the best ways. Go on, ditch your filters for once – forget chewy ladders and squelchy resonance and get hip to the groans and roars of distortion taking your patches in whole new directions. Once you start you might find you can’t stop…!