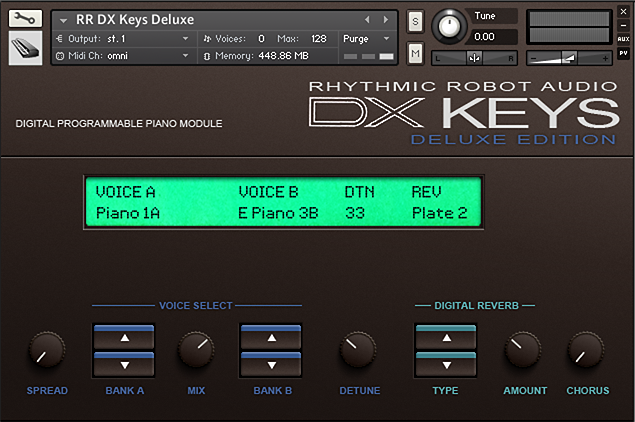 The massive sounds of the awesome DX5

DX Keys and DX Keys Deluxe are available together in a bundle deal which saves 50% off the price of DX Keys, and gets you all the keyboard patches from Yamaha’s top-flight 6-op synths in one awesome package. You can grab the bundle here.

The legendary DX5 – bigger, better and smoother! • Twin-layer sounds specifically designed from the ground up to work perfectly together: Yamaha’s sound-design masterstroke, unavailable on the DX7 • Identical internal construction and patch architecture to the mighty DX1 – sounds the same, just lights and heats the room slightly less 😀 • Some of the warmest and most expressive Electric Piano patches out there

If you thought the DX7 was fun, you ain’t seen nothin’ yet…

Although it was the 7 that took the world by storm, it wasn’t the pinnacle of Yamaha’s lineup of DXs. That crown went to the truly awesome DX1, which packed the guts of two DX7s into one mammoth-sized slab of steel and rosewood, attached a (savagely heavy) weighted wooden keyboard with polyphonic aftertouch, and covered the whole thing with enough LEDs to light a small town. It looked, and sounded, superb; Yamaha’s engineers hand-selected the components for the DX1 rather than just lifting them off the shelf, so the whole thing was fine-tuned to wring every last drop of sonic goodness out of its FM engine.

Not everyone had the space, or the pocket, for the DX1 though; and so the DX5 was born. Incorporating exactly the same internal sound engine as the ‘1 into a 76-note weighted (but not wooden) form factor, and ditching the elaborate LED displays that ate up so much real estate, gave the player the same sound and patches as the DX1 with a more compact footprint and price tag. (Sidebar: Having owned and played both, I can attest to the fact that the 1 is a joy to program, but the 5 is a joy to play; the keyboard feel is a delight. The 1 was, frankly, a tough number to play quick runs on – those keys were heavy!) Patches and performances could be, and were, shared between the two heavyweights, so much so that the ROM cartridges shipping with them are simply labelled “DX1 DX5 Voice ROM”. Sonically, they’re identical beasts. 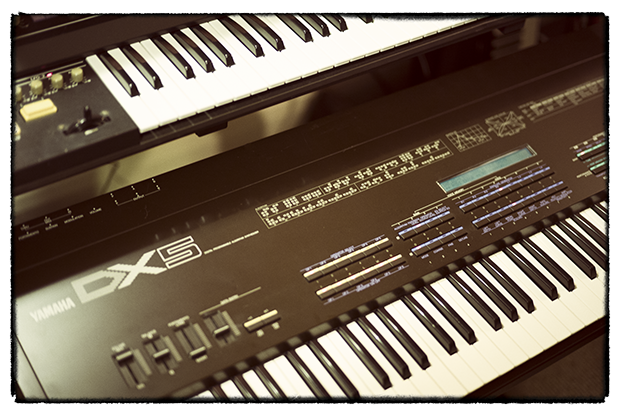 It wasn’t just the carefully-selected electronics that set the DX1 and DX5 above the DX7: the bespoke nature of both keyboards extended to patch programming too. Where the original DX7 was monotimbral, the DX1 and DX5 were effectively twin DX7s in one housing, allowing them 32-note polyphony and the ability to layer two voices. This facility was later extended to the DX7II lineup, but with the interesting (and crucial) difference that in the case of the DX1 and DX5, Yamaha’s programmers actually went the extra mile to design twin, complementary, versions of many of the key sounds. So, rather than just layering two instances of Electric Piano 1 and detuning them, the DX5 allows you to layer Electric Piano 1A with Electric Piano 1B… both of which have been created from the ground up to sound perfect together. The preset factory voices employ this neat trick over and over again, often giving an end result which is both warm and lush… not adjectives that always spring to mind when thinking of FM! (Geek fact: In many ways, you can actually think of the DX1 and DX5 as being 12-operator FM synths, rather than 6-ops, with all algorithms using two carriers. How nerdy is that?!)

The bottom line is that the DX1 and DX5 sound qualitatively different to their popular little brother; and what’s more, the onboard sound set was completely different. Here, then, comes DX Keys Deluxe, which brings you all nineteen keyboard patches from the DX5 in a faithful recreation of a Program slot, allowing you to detune and layer the sounds exactly as you could on the original. There are four Acoustic pianos, two Electric Grands, eleven Electric Pianos and a couple of Clavs just for kicks; mixing and matching these gets you all the original combinations plus a huge number of fresh new sounds all your own. Plus it all comes in a lovely rich chocolate-brown colour scheme, just like the original!

These are patches that were once the province only of very well-heeled professional players in top-flight studios. Kinda cool to get them in your DAW!

(All our Kontakt instruments require a full copy of Native Instruments Kontakt v4.2.3 or higher (including all versions of Kontakt 5). Kontakt Player is not supported: instruments will load, but will time out after 15 minutes. See the FAQ for further information.) You can read more about the original hardware Yamaha DX5 here.