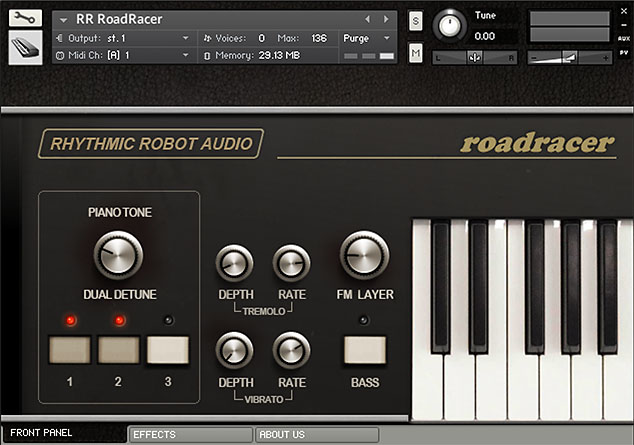 Electronic pianos of the 70s were a mixed bag to say the least. The general intention was to provide players with portable, cost-effective keyboards that could take their place with the band on stage; taking a back seat to this was making things that sounded like, you know, actual pianos. Underpinning the sound of many of these keyboards was the same frequency-divider technology that had proved so successful with cool transistor organs (like T-Organ); repurposed as a piano engine, though, the circuitry tended to struggle to produce anything convincing. The RoadRacer, from Italian manufacturer Crumar (also responsible for the very different but equally intriguing Analog Piano) carries on that proud tradition, sounding absolutely nothing like a real piano.

That said, there’s still a surprising amount to like here. The basic tone comes from three

pushbuttons, which give you three very different takes on the “nothing like a piano” genre: the first is muted, thick and woody; the second brighter and buzzier; and the third more like an electronic clav, very harsh and waspish. More fun comes when you realise you can combine 1 and 2, or 2 and 3, for in-between versions of these – of which our favourite is 1+2, which gives a brighter take on the woody tone (and sounds pretty expressive, too). The original RoadRacer was, unusually for its time, velocity-sensitive – unlike its stablemate the ColorSound – which definitely gave it an edge over some of its contemporaries. What’s more, these were tones clearly intended to be played through on-stage combo amps, and to our ears they benefit greatly from being put through Kontakt’s onboard amp sim, which rounds off some of the harsher highs and gives them a nice sense of weight. Treated like this they can comp along very convincingly at the back of an angry young punk track; smoothed out a little, they could find their way into all sorts of different places – even spaced-out electronica if you go to town with the effects!

Very nice indeed is the inclusion of a Bass instrument, which on the hardware eats up the lower half of the keyboard but which in our version can be engaged all on its own. It’s a round, warm, bouncy bass tone and very useable either on its own or when blended… which brings us to a little bit of alchemy that we’ve included.

In order to extend the sound palette of the RoadRacer, we’ve given you two controls that don’t exist on the original. The first is the Dual Detune knob, which doubles and detunes the selected tone for a much thicker, naturally chorussed sound. This is a great way to add a touch of lushness to the Crumar’s typical barking tone. Then, taking a bit of creative license with the machine, we added in an FM Piano layer, on its own control. This progressively blends in a multisampled DX piano – not the stereotypical tinkly Tines sound, but a much darker, richer tone sourced from the EbonyIvory patch (which we like a lot). With judicious use of the Dual Detune and FM Layer controls, you can really expand and warm the RoadRacer; and a touch of the onboard convolved Lexicon reverb brings the whole thing to life.

What’s more, the Bass patch also benefits from its own separate FM Layer, which introduces a sampled DX Electric Bass to the mix. Again, there’s a lot you can do by balancing these two tones and then shoving them through an accommodating Amp Cab sim.

All in all, we found RoadRacer a fun and intriguing little glimpse into the world of 70s stage pianos: nothing like the real thing, but entirely like itself, and with some neat tricks up its sleeve.