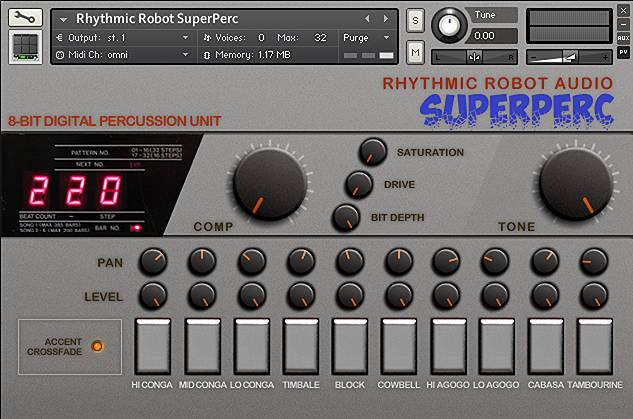 Crunchy, punchy and percussive! Another little plastic gem from the 80s • Perfect partner to our recreation of the Korg SuperDrums • Adds 8-bit cabasas, congas, timbales, agogos and more to your standard kit pieces

Ever since we captured and sampled a Korg DDM-110 SuperDrums in all its crunchy 8-bit glory, we’ve been on the hunt for its sister instrument, the slightly rarer (but just as 8-bit) DDM-220 SuperPercussion. Now, at last, one’s fallen into our drum machine tiger trap, and we’ve tranquillised it, brought it back to the lab, and strapped it to the sampling bench…

Packing a new set of percussion-based sounds into exactly the same form-factor as its older sibling, though with a shinier silveroid colour scheme, the SuperPercussion complemented the beefy conventional kit pieces of the SuperDrums with cabasas, congas, timbales, a snappy little woodblock, tambourine, agogos and the inevitable cowbell (yay!).

The sounds are distinctively crunchy and undeniably 80s, but they slot very nicely into modern arrangements: we like the wood block, tambourine and cowbell particularly, just for adding a bit of incidental high-frequency colour to your rhythm track. The SuperPercussion uses the same Accent system as the SuperDrums, which we’ve rewired so that velocity can be used to control Accent level. The result is a smoothly variable sound that grooves along very nicely with fingertip control

Of course, the usual suspects are present to roughen up your sound if you want: we’ve found that SuperPerc responds really well to dropping the bit depth and adding some saturation, which make the sounds a little fuzzier and fizzier and move them backwards in the soundstage. If you want some bubbling percussion happening in your track but don’t want it too front-and-centre, this is a great way to fade it to the background without using reverb and getting everything mushy. Likewise, the big Tone knob can roll off the high frequencies and some of the more aggressive edges, letting the pieces sit in the mix when you don’t want them leaping out at you!

If you’ve yet to join the 8-bit party, SuperPerc and SuperDrums are a great way to get your foot in the door. Go cowbell!