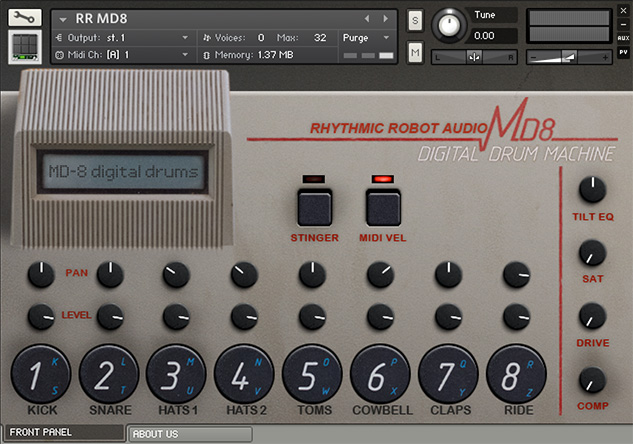 Super-tight sampled drums from 1988 • Could this be the world’s crunchiest snare?! • Claps, cowbell and toms for the classic 80s vibe • All kit pieces recorded both clean and via the Stinger for added analogue punch • Comprehensive effects including Tilt EQ to tailor the sound

Back in 1988, there were increasing numbers of high-end digital drum machines on the market, some of which allowed you to swap sounds in and out via cartridge expansion or – more rarely – diskette; but there was nevertheless a clear gap for a low-end machine that both sounded good and allowed some form of expandability. Cheetah threw themselves straight into this gap with the MD8, a drum machine that not only promised sampled playback, but also tempted users with the ability to load and save samples to tape. (Yes. Tape.) Best of all, it cost just £140. How on earth did they manage it? 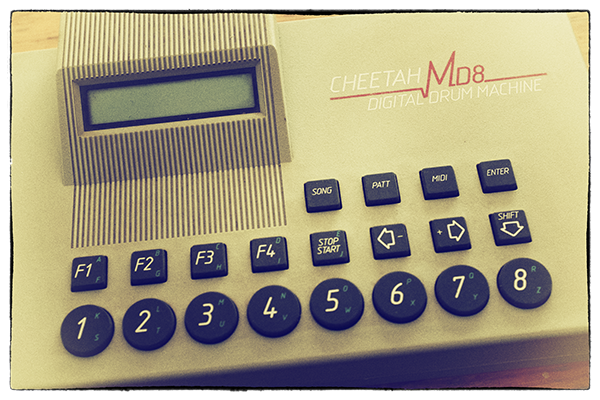 Well… it quickly became evident that they managed it by cutting just about every corner possible. While a Yamaha RX7 had 2Megs of sample memory, the MD8 had just 60k. Into that it squeezed 8 sampled kit pieces, with very crunchy results. But it was in the machine itself that the cost-cutting really showed. The original Sound on Sound review of the MD8 details in excruciating detail the two hours it took the reviewer to load a soundset successfully; plus there were the minijacks and rubberised buttons and the general shabby feel of the components. MD8s were simply not built to last; which is why working examples are now so very rare.

It took us three goes to get one that functioned… but third time lucky: our MD8 is now sitting in a little padded cell all of its own, safe and sound, while its samples are released into the world for you to enjoy. These are severely tight, compressed, 80s-style hits – the snare in particular is super-crunchy and just wonderful. The original MD8 only managed “hi” and “lo” toms, but we’ve crafted a middle version to fill things out; plus you get cowbell, claps, a ride cymbal (with a pretty truncated decay tail, of course) and some crispy little hi-hats. The sound is supremely usable, really encouraging those Harold Faltermeyer-style riffs 🙂

As with a couple of our other drum machines, we recorded this soundset both straight and via our Aurora Audio Stinger front-end, to add some nice class A punch to the sound. You can swap between these on the front panel. There’s also a handy little Tilt EQ which allows for quick and easy thickening / brightening, plus our usual Saturation, Drive and Compression tools.

The MD8 was in many ways a rather cruddy piece of plastic, but hidden inside the shoddy shell was a funky little digital heart. We hope it makes you smile.

(All our Kontakt instruments require a full copy of Native Instruments Kontakt v4.2.3 or higher (including all versions of Kontakt 5). Kontakt Player is not supported: instruments will load, but will time out after 15 minutes. See the FAQ for further information.) You can read more about the original Cheetah MD8 here and here.