“In the MR11, you get all the MR10’s sounds primed to play original patterns via your DAW… I was pleasantly surprised by how the MR11’s kick and snares cut through. Velocity is decidedly funky when applied to hi-hats. Another cracker” – Sound on Sound magazine 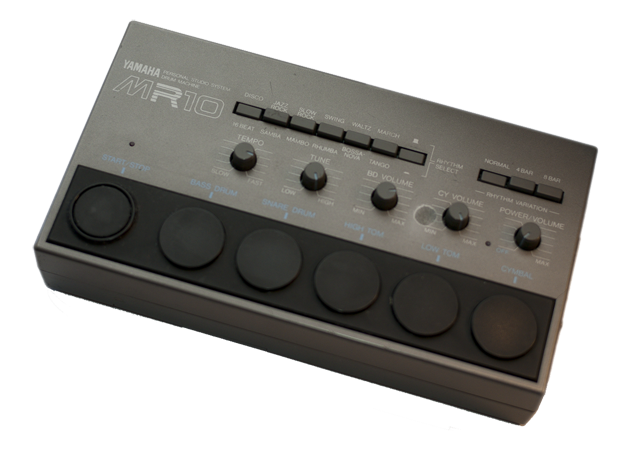 Yamaha’s MR10 was a unique bit of kit: Yamaha’s only analogue drum machine. It featured some basic built-in rhythms and a handful of pads with which you could “play along” – the manual has some cracking illustrations of Cool Young Kids in 80s street wear doing just this. Unfortunately, you couldn’t record anything you played; the MR10 had no programmability at all. It was also pretty plasticky, which may explain why these things are pretty rare nowadays.

However, it did make up for these flaws with some BIG advantages: its sounds. These are quite unusual for the early 80s: the snare drum sounds surprisingly cool, rather like a Simmons snare; the kick drum is very dense and powerful (it sounds like a kick from a much more expensive unit) and the hats are good too, with quite a thick sound to them above and beyond the usual drum machine “tsshh”. We kid you not – listen to the audio demos!

If only it had been programmable… Well, of course, now it is. We’ve sampled the original sounds from the front panel pads, plus some sounds that only appear in the built-in rhythms: conga, guiro and a second snare sound that in many ways is more useable than the front-panel one. 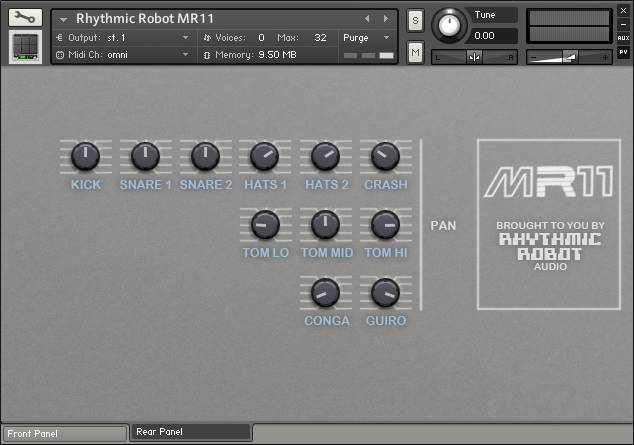 Each of these sounds has been multi-sampled through the whole travel of the MR10’s “Tune” control. The control isn’t a simple pitch-shift, and seems to have a much more marked effect on the higher frequency sounds like the crash and hats than it does on the kick. It’s a very characterful control, and you have instant access to it on a per-sample basis from the Kontakt front panel (in the original, of course, it affected all sounds simultaneously).

We’ve split the original two tom sounds into three, so you have high, mid and low toms available from your keyboard or grid editor. We’ve also added rear-panel controls for panning each individual sound, so although the front panel has “grouped” level controls for toms and percussion, the individual high, mid and low toms, plus the conga and guiro percussion sounds, can all be panned individually from the rear panel.

A “velocity retrofit” switch in the bottom right-hand corner lets you use keyboard velocity to control the Tune control rather than setting it from the front panel. This can make the usually robotic drum machine sound way more humanised: the harder you hit the keys (or the higher you draw in that velocity curve!) the brighter and more up-tuned the sounds become. Applied sparingly to hat patterns, for example, this can really make the difference between “mechanical” and “grooving”. So you can either be authentically 80s and have a robotically static setup of sounds, or you can inject some human variety into the sounds with your own playing style.

Finally, there’s some useful processing control in there to: a bit-crusher for lo-fi grunge (just leave it all the way up for full 24-bit quality); tube saturation and full-on drive distortion; and a buss compressor to glue everything together. Push this all the way up and you’re into serious pumping territory.

With Tube set to 12 o’clock and Comp to around 3pm, the kick on this thing is a joy to behold. The MR11… one better than the MR10!