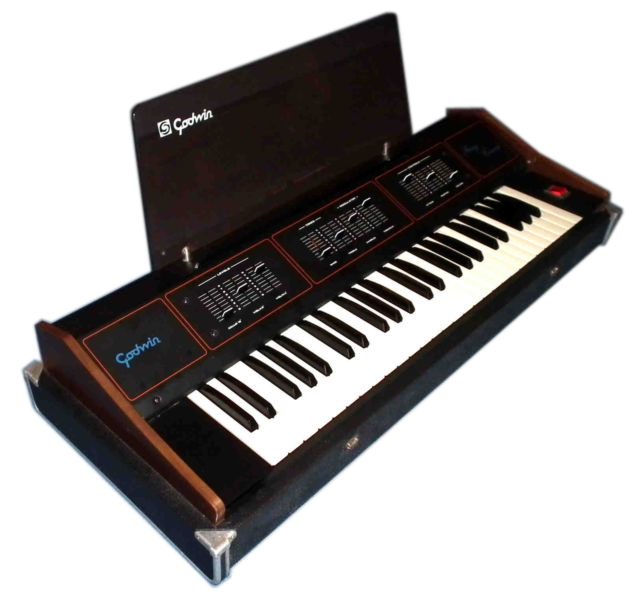 The Godwin String Concert was a wonderful analogue string synthesiser with a real character of its own. It was a sophisticated machine for its time, boasting a genuinely polyphonic (rather than paraphonic) synthesis engine which could handle an envelope curve per note – a considerable advantage over some of the other offerings on the market. Other neat features included a smooth-sounding treble filter that mellowed the tone wonderfully, a bass boost or cut that could warm things up in the low to low-mid range, and of course blendable cello, viola and violin sections to get that authentic string-orchestra sound.

While the Godwin lacks the press-button tone variants of the Logan String Melody, it really scores where it counts – the base character of this instrument is an absolute classic of the string-synth genre. It has a flowing, silky tonality that soars and climbs, and opens up into a rich airy soundscape with the addition of the Tremolo and Chorus controls.

These really are the Godwin’s secret weapon: the Chorus is a superbly rich, warm effect, adding real depth to the sound without muddying it, while the Tremolo – which you’d expect to be a simple amplifier LFO – in fact ropes in multiple LFOs running at different speeds to generate a complex, dynamically evolving movement into which the Chorus can get its teeth. This makes for a much more convincingly organic string sound, with subtle interplay between the tremolo LFOs, the Chorus effect, and the multiple string oscillators yielding up a really satisfying massed sound.

The net result is a whole that is far greater than the sum of its parts: a dash of Chorus and Tremolo really makes the instrument sing. When we first got this in the lab, we couldn’t stop playing it: it’s addictive! Where the Logan is lush and thick, the Godwin is purer and sweeter, and doesn’t fill up the mix as much. Sound on Sound magazine ranks it as sonically superior to the the (more famous) Solina, and we’d have to agree.

thmic Robot version of the Godwin aims to capture the sound of the original as closely as possible, but we’ve added in a couple of extra touches to spice things up if you so wish. The original Chorus has been sampled, and can be switched in and out via the Vintage Chorus switch, but there’s also an additional Chorus slider which ropes in a modern stereo chorus effect. The Godwin was a mono instrument, so this brings a welcome touch of stereophony to the party, and can be used on its own or in conjunction with the Vintage Chorus. Meanwhile, the Velocity switch does what you’d imagine, allowing key velocity to control amplitude for a more expressive playing experience. It’s a simple set of controls for a simple instrument which is set apart by its tone rather than its complexity.

Reach for Godwin when you want shimmering, delicate string sections; rich drifts of sound; analogue warmth without mud; Pink Floyd-style vintage tones; and silky smooth pads. It really is a joy to play.