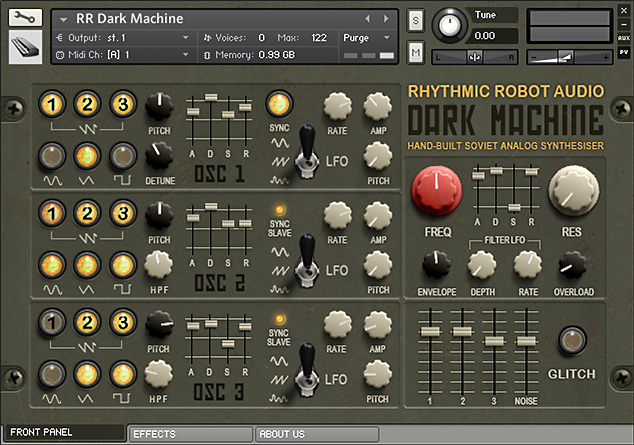 Ex-soviet handbuilt synthesiser with 3 flavours of sawtooth and considerable damage • Contact corrosion, capacitor failure and stability issues throughout • Broken, erratic waveforms and randomised start-points ensure that every note is unique • Powerful, comprehensive controls including LFO Sync, Overload and multiple Filters • Stackable, detunable waveforms for insane levels of thickness – up to 19 oscillators at once! • Over 100 factory patches, plus awesome Glitch control for randomised new sounds

The heart of Dark Machine comes from a damaged, abandoned ex-Soviet transistor synthesiser which was clearly handbuilt at some point in the early 1970s. With crude components and basic point-to-point wiring, our source instrument was once a fairly simple monophonic keyboard – though with a quite ambitious range of waveform options, including various filtered sawtooths, a squarewave and a triangle. Time, though, has not been kind to this little Cold War soldier. Capacitors have leaked; solder nodes have dried and cracked;  the keyboard contact points have corroded and become intermittent; tuning is now unstable across the entire machine. The waveforms are grainy with interference and noise, occasionally fading in and out, crackling as the key contacts sputter, or slewing in pitch.

While in other (saner) hands this might have become a fun restoration project, we were far more interested in capturing the soul of the synth in all its crackling, buzzing, humming goodness. Played polyphonically, the uncertainty of those uneven oscillators translates into a strange, unpredictable lushness. Layered one on top of the other, the result is eerie and beautiful one moment, coarse and raging the next. The constant background interference and crackle makes even the simplest patches sound aged and sepia-toned, while stacking up all the sawtooth flavours simultaneously and tweaking the Detune control yields an instant headrush of thick analogue power. You can almost smell the hot circuitboards…!

In its most basic sense Dark Machine takes a single-oscillator monosynth and turns it into a 3-oscillator poly – but that’s really only one sixth of the story, since each of those three oscillators can in fact access 6 waveforms all at the same time. With the pushbuttons on the left of the interface you can, for each oscillator, engage three separate and distinct versions of Sawtooth, each with their own character and complexities; plus Square and Triangle waves; plus a pure analogue Sine wave for useful depth and body. On top of this there’s our favourite Korg 770 Scale Noise available as well: this follows the pitching and envelope settings for Oscillator 3, but can be mixed in separately. It’s great for adding extra graininess and air to your patches.

Each Oscillator section has its own LFO, switchable between Sine, Saw and Randomised waveforms. The LFOs can be patched to Pitch or Amplitude, allowing very complex, evolving patches to be created when the LFOs are freerunning. But if you prefer, the three LFO rates and waveforms can be Sync’d with a single button-press, making it easy to dial in traditional tremolo and vibrato effects with all the LFOs locked. Oscillators 2 and 3 have High-Pass Filter circuits built in: these are great both for creating band-pass effects, in conjunction with the main low-pass filter, or for simply cutting the weight out of one or both of these while leaving the air, crustiness and dirt intact. Since most of the crackles, fizzes and other glitches in the waveforms occur in the higher frequency range, you can strongly accentuate these features by creating a core sound with Osc 1 and then adding extra high-pass-filtered dirt from Osc 2 and Osc 3.

Oscillator 1, meanwhile, foregoes the HPF in favour of a clever Detune control. This not only detunes Osc 1 against Osc 2 and Osc 3, but also Osc 1 against itself – so that the various waves represented by the waveform buttons to the left of the pane become progressively more detuned the further you turn the knob. This means you can create massive, thick patches using all three oscillators; or thin, gossamer pads using just a couple of waves from Osc 1 plus perhaps a bit of Scale Noise – but retaining the ability to detune things at all points.

A classic Filter circuit provides all the sweeps, squelches and wah effects you could want, and also hosts the Overdrive knob which pushes the entire sound even further into saturation – great for leads, or dialling up the warmth. And of course our ever-popular Glitch control is there in the corner: clicking this will generate instant new patches, using musically-intelligent randomisation to make sure that you get plenty of inspirational starting-points. 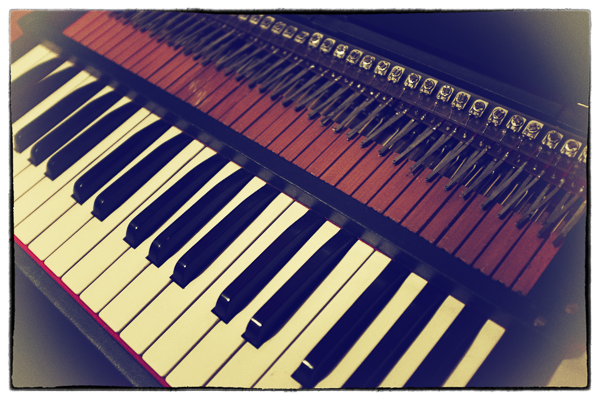 Round the back is a comprehensive Effects pane which includes Chorus, Phaser, Delay, Rotary Speaker and Amp Cab simulations; you’ll also find controls for Mod Wheel vibrato, Stereo Spread and Velocity assignment (to both amplitude and filter cutoff) – making Dark Machine responsive and expressive to live playing. Best of all, we’ve included our Lexicon-based convolution reverb, Icon Reverb, with eight classic Lexicon digital patches and two characterful Spring reverbs onboard. This is where you round out or smooth off the sounds you’ve created: a dash of Plate or Spring reverb can really bring a patch to life.

Dark Machine is a deliberate step away from clean, anodyne synthesisers, not only embracing the faults and flaws of its source but enhancing them, stacking them up and making them sing. It can do moody, twilight rumblings; surging saturated leads; and ghostly breathing pads. Just don’t ask it to be ordinary.

Many of the 100+ factory patches for Dark Machine come courtesy of our good friends Ed Ten Eyck and Anatol Locker. You can hear some of Anatol’s tracks here, and if you want to print your own synth, have a look at his day job here. Ed does sound design for other synths too, so take a look at his brilliant patches here.