Buying Loopscape entitles you to get its sister product, Loopscape Vinyl, for half price! See our Hot Deals page to grab this offer.

“Dripping in oxide… You can almost taste the wow, flutter and print-through as the recordings faithfully, if perversely, reproduce every blip, hiss and click… example patches like Shenai Drift show off its warmth admirably”

“With three loops combined, the result is a lush and dense synthesiser sound, evolving and transforming constantly… it’s incredible.” 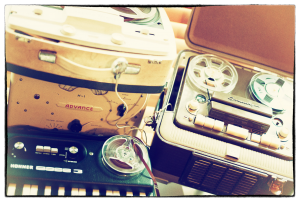 Inspired by the experimental soundscapes produced by 70s pioneers like Brian Eno, Loopscape is a synthesiser that creates endlessly modulating, evolving complexities of sound from raw waveforms recorded onto looped sections of audio tape. It is richly warm, thoroughly analogue, and every sonic inch of it has been printed to oxide and passed across the playback heads of vintage tape gear of the past. This is the sound of science meeting art: the depth of analogue synthesis run through real tape spools. And look – it’s covered in knobs and sliders, too!

Loopscape starts with a simple idea, one that found traction with the musique concrete brigade of the 60s and 70s. Back then, Brian Eno composed “Music for Airports”, a sound installation piece which employed tape loops of different lengths running simultaneously. Although the individual loops cycled round predictably, the combination of sound produced by multiple loops of different lengths running all at once created an “incommensurable” sound that was, to all practical purposes, unlikely ever to repeat. Instead it just continued to evolve, forever, into infinity. Isn’t that just cool? 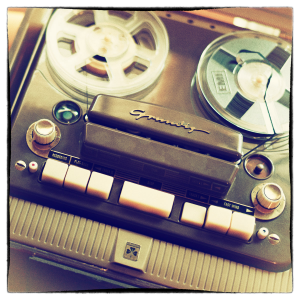 Loopscape takes that concept and turns it into a synthesiser. We started with loops of tape. Lots of loops of tape. The basic sound-creation panes of Loopscape allow you to select any one of six basic synthesiser waveforms: two Sawtooth waves, Triangle, Square, Sine and Noise. All of these started life as true analogue waveforms from a variety of synthesisers, except for Noise, which we took from atmospheric static.

The raw waves were then recorded onto several old tape machines running at a variety of speeds. Now, for this instrument to make sense, the last thing we needed was clean tape machines. We wanted every mechanical problem under the sun, simply because we wanted our tape loops to show a lot of natural variation in their sound. We invited wow, flutter, wobble, hiss, head bump and print-through into our homes, sat them down and poured them a drink. We made friends with them. Who needs Studer mastering machines at 30ips when you can have cranky old 60s valve sets from the attic instead? The outputs of these vintage tape recorders were then recorded back into the digital domain at 24-bit quality to preserve every wonky detail of their erratic goodness.

Each basic waveform is therefore available within Loopscape at 8 different loop lengths: half a second, two thirds of a second, 3, 5, 7, 11, 13 and 17 seconds. (Why those particular numbers? Because they’re primes, and we believe they have a special mojo all of their own.) We wanted you to be able to hear those loops, so we deliberately chose sections of tape that failed to loop smoothly, and we did very little to disguise their splice points. If you select a half-second loop, you’re going to hear that thing looping round every half a second like a heartbeat.

A step-by-step guide to loopscaping your patches

This is the sound of a single loop played for 30 seconds. We selected the “Saw 1” waveform, set it to a 3 second loop length, and just held down the note. You’ll hear it looping round and round rhythmically. There are no other effects or processes going on, just the raw sound of the recording.

This is exactly the same set-up as the first example, but instead of holding down just one note, we held two to make a perfect 5th chord. Although there’s still no other processing and only a 3-second loop being used, you can hear how immediately more lush and complex the sound becomes – largely because there are now two 3-second loops in play, not just one.

Now we take things one step further, adding the other two tape loops to our sound. To the 3-second loop of “Saw 1”, we add a 13-second loop and a 17-second loop, both also of “Saw 1” (to keep things simple!) We now have a combined loop that won’t repeat for about 13 minutes, although the cyclical beat of the 3-second loop is still discernible.

This is starting to sound like a Loopscape patch now! To our three looping waveforms we add effects and LFO magic to create a rich, dense wash of sound. We still haven’t even touched the three envelope generators, and it’s still just two notes playing, but with any luck this is enough to give you a sense of what Loopscape can do. 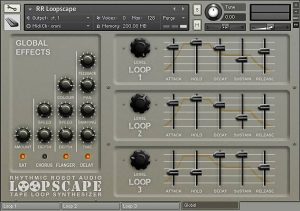 Now the fun really begins, because that looping segment of tape can now be processed by a resonant high / low pass filter and four dedicated LFOs. One of these is assigned to filter cutoff; two work independently on the amplifier circuit; and one goes to pitch. These LFOs can be chosen freely from five different waves – Sine, Triangle, Sawtooth, Square wave and Random; and each can have its depth, rate and speed set independently. You can also decide whether to have your LFOs retriggered with each key press, or “freewheeling” and therefore synced across all notes (for more obvious periodic beating effects). In practice, this means that an already richly-modulated source wave can be further modulated by multiple LFOs, each bringing their own cyclical variation to the sound. Wild!

What we’ve just described is the contents of one Loop Playback pane of Loopscape. And Loopscape has three of these: that’s where we get our multiple tape loops from, in the spirit of Mr Eno. Three different tape loops, of whatever lengths you choose, playing back whatever waves you choose; modulated by a total of twelve sets of LFOs, either freewheeling away or triggered afresh with each key. In a word, awesome. And it’s not at all complicated: take a look at the screenshot above and you’ll get the hang of what we’re talking about here in no time. Drag that big chunky pinch-roller at the top of the screen to set the loop length. Choose a waveform to play back from the little Loop Select pane. Then go to town with the filter and LFO modulations. And do it all three times over, switching between Loop machines using the tabs at the bottom of the screen, for three times the sonic power. That’s all there is to it. 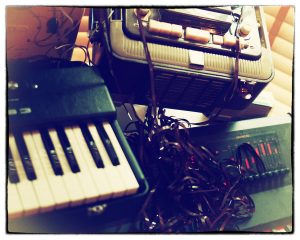 By setting up the Loop panes you create an astonishingly rich sonic tapestry, warmed with real oxide. You now take control of that sound on the Global pane, which gives individual Level and AHDSR envelopes for each Loop that’s running, plus a set of Global Effects designed to complement Loopscape’s character. The envelopes allow you to, say, start a sound with one loop predominating, and then have another gradually rise in level to take over; they can, if you like, add their own gradual sonic development to your patch. Meanwhile the Effects take in extra tape saturation, to give the sound some real drive; Chorus and Flanger, for classic additional tape effects; and a fully-featured Delay. These last three all incorporate stereo effects to widen the sound.

Loopscape is capable of producing a sound so dense, rich and evolving that one single held note will quite simply not repeat its sonic fingerprint for thousands of years. Seriously: we did the math on this. That’s Brian Eno’s “incommensurability” right there, folks! More importantly, though, by sculpting and tweaking your patches with the filters, and by balancing levels, you can create astonishingly varied pad sounds, evolving soundscapes, textures, beds and washes – Loopscape’s signature sounds; plus a huge variety of “traditional” synthesiser patches with a unique sonic imprint to them, born of Loopscape’s inherent unpredictability and magnetic-oxide heritage.

Loopscape is our most ambitious project to date, and embodies everything we love about old technology: warmth, nonlinearity, valves, solder, heart, static electricity, tolex and tape spools. We love it to bits, and we hope you will too.