“Tubes & Wires is based on samples coaxed from venerable signal generators. These three oscillators give Tubes & Wires its wayward but distinctive character. Louis and Bebe Barron would have been proud!” – Sound on Sound magazine 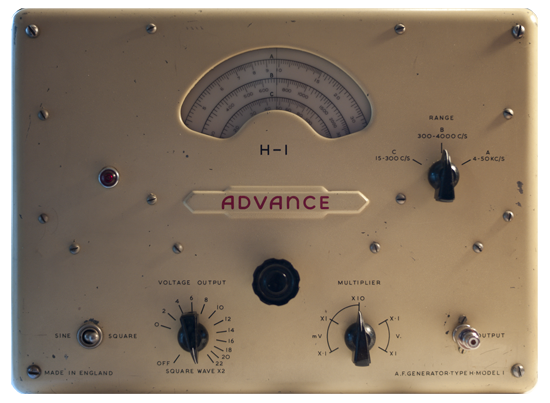 Tubes & Wires is a huge, rusting hulk of a synthesiser, smelling of Bakelite and hot valves, glowing and humming and breathing.

The heart of this synth lies in hundreds of careful hand-tuned samples of three classic vintage signal generators. We chose these bits of ageing scientific lab equipment specifically for their character and crusty goodness: there isn’t a clean trace among them. They’ve been used, and abused, and left in the dusty sheds of men with beards, until we rescued them and made them sing for us.

Their wonderful raw materials, sampled at 24-bit, are then run through three parallel sets of switchable filters, three parallel sets of amp envelope generators, and three parallel “Rail Voltage” controls to simulate running their circuitry too hot… resulting in tube saturation effects which you can control on a per-oscillator basis. The sounds are rich and unstable to begin with, but a touch of Rail Voltage really brings out their raucous edge! 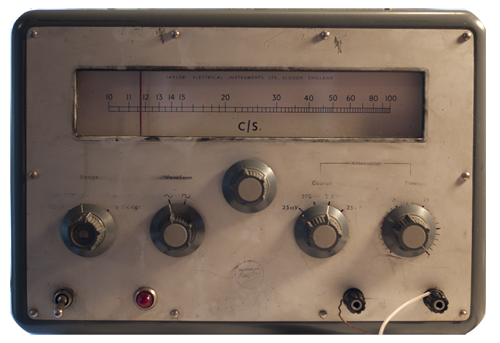 Two separate LFOs route to pitch and amplitude for simultaneous individually-addressable tremolo and vibrato, while global stereo spread and oscillator drift controls allow you to fine-tune stereo width and analogue pitch instability. Round the back are Chorus and Phaser effects modules with control over depth and rate, to give your patches extra vintage warmth or a little stereo shimmer. We’ve also added a set of oscilloscope traces showing each individual wave type.

The whole synth can be switched from full poly to mono mode, with adjustable “glide” (portamento) – so you have everything from pads and strings, through resonant brass, to bass and mono lead lines, right where you want them: all with an unmistakeable, utterly unique, vintage glow.

It’s all about the oscillators…

The first oscillator of Tubes & Wires offers both sine and square waves from a rusting old Advance H-1 valve (tube) signal generator. This was by far the most erratic and beaten-up of our selection, and the Kontakt UI reflects this. The sine wave is full of crackles, intermittent noise and glitches from some bad internal connections and a faulty amplifier circuit. It also periodically distorts, flattening the wave slightly. This makes for a wonderfully characterful palette of sound – or you can high-pass filter it until just the crackles and glitches remain, and add these to taste to the other two oscillators to give them a similar kit-on-its-last-legs vibe. It’s quite simply the most un-sine-like sine wave we’ve ever heard. You can see a trace of it to the right.

The Advance square wave setting was, basically, broken. It produced unusable shrieks and cyclical howls. But we found if we lodged the sine / square selection switch at just the right point, we could get a weird, hot, metallic tone from it. It was contaminated with a fair amount of mains overtones and has a very peculiar tonality – almost as if its being ring-modulated. (Who knows. Perhaps it is.) This is what we’ve captured as the Advance “square” wave: a kind of throbbing, warmly dissonant roar that conjures up sci-fi soundscapes and malfunctioning racks of laboratory equipment. Here it is on the left.

The second oscillator offers a choice of, again, sine and square waves, this time from a Taylor valve (tube) generator. This turned out to have a magical sound quality, as though it had been secretly practicing at being a synth all its laboratory life. Its square wave is a very aggressive, distorted, peaky waveform which is instantly at home being low-pass filtered in classic analogue synth fashion – you can see it to the right here. We found this was our go-to oscillator for a lot of classic patches (and indeed it’s also become the core of Bad Bad Bass).

The sine wave, meanwhile, was being clipped quite badly by its output circuit – which was great! It gives it far more edge than a standard sine – perfect for reinforcing the fundamental frequency of a bass patch, for example. There’s some instability that increases as the wave goes up in pitch, too, so that by its higher ranges it’s starting to look more like a kind of weirded-out square wave.

The third oscillator is taken from a transistor-based Goodwill function generator. We chose this because old valve signal generators generally only offer square and sine waves, and we felt a proper polysynth should have sawtooth and triangle too. Of course, we made sure to choose a Goodwill that was far from perfect. With the duty cycle control of its Ramp waveform turned all the way clockwise we found a good, buzzy sawtooth wave which nevertheless has a lot of slew and inaccuracy in its cycle: sort of a “rose-tinted” sawtooth sound!

Towards the middle of the Ramp generator’s duty cycle we get what’s trying to be a triangle wave, though it’s frankly a bit weird. It looks like it’s been welded together from two different triangle waves in some kind of backstreets chop-shop. But it sounds great. You can of course rough if up still further if you want to by using the oscillator’s “Voltage” control to deliberately overdrive it. (Remember, you have this control available individually for each oscillator – so you can layer up some really steamingly warm patches in no time!)

You can probably tell that we love Tubes & Wires to bits, and would witter on about it all day if we could. Our goal with it was to get the richest raw materials to start with, and then to complement them with really versatile controls so you can get the most from them. This is a synth that wears its vintage credentials on its sleeve: dusty, crusty, growling and screaming, it’s a world away from today’s squeaky-clean digital world.

Tubes & Wires: get blinded with science!