A grungy little chiptune synthesiser based on the onboard sound chip of the Sinclair Spectrum • Perfect for chip-based musical styles, or for blipping up your electronic tracks! 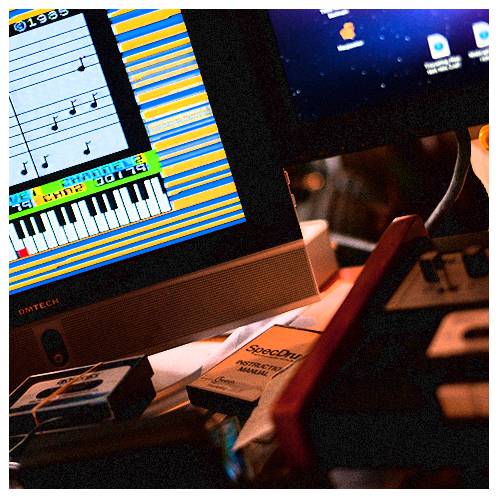 First there was SpecTalk. Now SpecTone completes our obsession with Sinclair ZX Spectrum instruments, catapulting you back into the early 80s when making music “in the box” and making chip music were, basically, exactly the same thing. The Spectrum is no Commodore SID (though we have that for you, too – for free!), but dammit, it can make bleeps and bloops with the best of them, all grainy and shinily aliased.

Our SpecTone samples several “music” programs for the Spectrum: the truly, truly cheesy Wham! The Music Box (a primitive sequencer with only one tone, but a handful of Wham!’s greatest hits pre-programmed… what’s not to love?); some “drum” tones taken from the Wham! program and also from dk’tronics Sound Designer, which allowed very basic waveform editing on the Spectrum’s screen (we used it to create some different tonalities of noise); and, finally, some vowel sounds taken from the Currah MicroSpeech that we used to make SpecTalk. These have been looped and can be blended in with the Spectrum’s basic tones to give a wider variety of sounds: you can choose from Ahh, Arr, Ehh, Err, and Urr vowel noises, with or without vibrato, and either have them on their own or mixed with the Speccie’s onboard chip tone.

We’ve also grafted in some effects, including a low-pass filter which you can use to tame some of the vicious aliasing noise the Spectrum likes to generate (though for all we know this might be exactly what you want, which is why we left it in there. The choice is yours!) – plus an ADSR envelope to give you a bit of control over your tones.

The results are a one-stop-shop for 80s computer tones: basic and grainy in their raw form, but capable of being moulded into pads, leads and effects sounds (though, to be fair, they’re all going to sound a bit basic and grainy… that’s the fun).

The vocal waves from the Currah add a new and weird sonic element to the SpecTone‘s tonal palette, and lend themselves particularly well to blended pad sounds and to brief, blippy sound segments. And the drums – or should we say “drums” – are fun, characterful little reminders of what game soundtracks sounded like before Lara Croft and orchestral scoring libraries streaming from multi-terabyte RAID arrays. Let’s just say, don’t leave your 808 at home, okay? But for little moments of 80s colour, they’re great.

SpecTone: think of it as a black plastic wormhole taking you thirty years back in time…