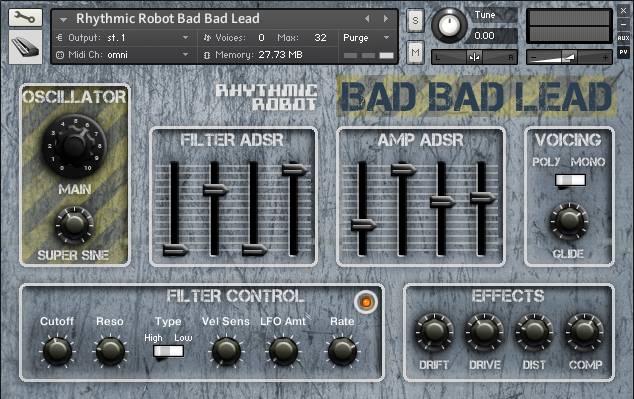 “Bad Bad Bass and Bad Bad Lead are full of valve oscillator samples. The main differences between the two synths are the source waveforms – low and aggressive or high and snarly… their primary oscillators are backed up by an additional, filthy, sine wave. In the shape of Drift, Drive, Distortion and Compression you also get Rhythmic Robot’s familiar tools for gaining attention. This little collection scores highly for its raw valve tones and for its simplicity” – Sound on Sound magazine

This is the unpleasant inbred cousin of Bad Bad Bass: two vicious valve-generated oscillators drawn from Tubes & Wires, hand-picked for their upper frequency bite and snarling aggression. (We are not responsible for your tweeters…) The main oscillator is a distorted sawtooth, which can be blended with or replaced by an up-tuned sine – again distorted and much grungier than a standard sine. You can use them individually: the saw is rich and buzzy, while the sine is thicker than usual and has overtones which it really shouldn’t have. Or you can mix them up, at which point they’ll sometime frequency-beat against each other for strange pulsing effects. From sharp and nasty to smooth and slippery, there are leads here for everyone.

The effects block covers compression, tube drive, full-on distortion, and extra oscillator drift (try mixing high doses of Drift with the Glide control for some wonky-pitched analogue insanity!). Switch things to Mono for a trad lead sound, or keep things polyphonic and maybe use a high-pass filter for whistly pads or soundscape-like textures. When the high frequencies are where you want to go, Bad Bad Lead will take you there. Just be sure it doesn’t slip some roofies in your drink along the way.

\\\”Over the last two issues, we\\\’ve looked at two collections of instruments from new manufacturer Rhythmic Robot. This month we\\\’re going to explore RR\\\’s Laboratory. For a bit more explanation of what\\\’s behind these 24‑bit mono Kontakt instruments (which require the full version of Kontakt, rather than just the player), go to the first of our Rhythmic Robot reviews (/sos/may12/articles/beat_room.htm).

The Laboratory is where the Professor and his assistant Mongo construct new instruments out of whatever spare parts happen to be lying around. For example, they made a polyphonic synth from vintage Stylophones. Stylosynth has three oscillators and, although it doesn\\\’t sport a mass of controls, its samples have a warm and pleasant tonality. The synth\\\’s three oscillators are Vintage, Modern and Stacked. Modern is rather bright and slightly distorted, Stacked is a pile of old Stylophones in some warped version of unison, and the Vintage setting is mellow and generally the most pleasant. You are free to mix them all together in any combination and this layering generates some reasonably lush synth patches. Stylosynth has a resonant filter with velocity control, plus two envelopes and an LFO that modulates the filter. There\\\’s a chorus that doesn\\\’t quite replicate Stylophone vibrato, but I doubt this will be an issue for anyone — except maybe Rolf Harris.

Although Stylosynth is capable of blips and pads, it\\\’s not in the same league as Tubes and Wires, or TW1. This is the most expensive of the collection (still less than £20) and is based on samples coaxed from venerable signal generators. TW1\\\’s three oscillators are named after the devices that spawned their waveforms: the Advance H1, the Taylor, and the charmingly named Goodwill Function Generator. Images of each wave are shown on the rear-panel oscilloscope, and it\\\’s these that give the TW1 its wayward but distinctive character. After the oscillators, the architecture is simple enough. There\\\’s a dual-envelope structure with a resonant low‑ or high‑pass filter and extra buzz supplied by \\\”rail voltage”. This simulates overheating the circuitry, Louis and Bebe Barron would have been proud! Turn to the rear panel for a basic chorus and phaser.

Last up are two similar synths, the Bad Bad Bass and Bad Bad Lead, also full of valve oscillator samples. The main differences between the two synths are the source waveforms — low and aggressive or high and snarly — and there\\\’s a degree of overlap if you already have the TW1. Their primary oscillators are backed up by an additional, filthy, sine wave, and from then on there\\\’s a filter section comparable to Stylosynth\\\’s and optional poly or mono operation. In the shape of Drift, Drive, Distortion and Compression, you also get Rhythmic Robot\\\’s familiar tools for gaining attention.

This little collection scores highly for its raw valve tones and for its simplicity, an attribute often overlooked when throwing everything but the kitchen sink into sample libraries. It\\\’s true that, with patience, you could probably find a selection of signal generators in junk shops and at car boots, then painstakingly sample them to create your own unique instruments. Alternatively, these are priced so that you don\\\’t have to! \\\” – Sound on Sound magazine