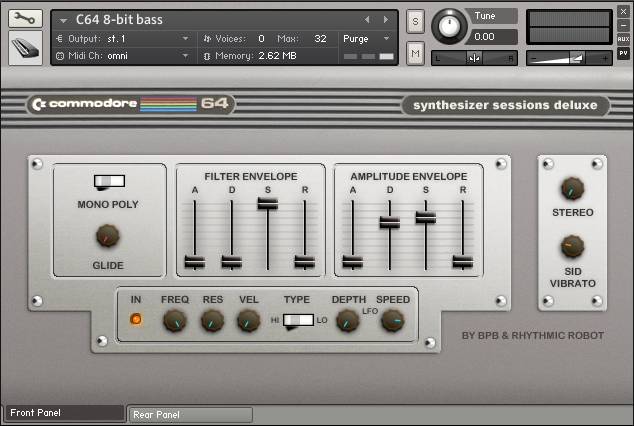 This demo is by the talented James Stringer. You can hear more of James's stuff on his SoundCloud page.

The Commodore 64! Another beast of a mid-80s computer that punched above its weight in the audio stakes, thanks to the inbuilt SID chip. The SID has rightly gained a real cult following and reputation for pushing the boundaries of what was possible for a home computer of the time. While the Atari ST’s built-in MIDI cornered the market in pro-audio, the C64 faced off against the likes of the BBC B and the Spectrum in the consumer and education fields, and – musically speaking – trounced them. The SID chip gave it far more complex and versatile synthesis capabilities than its contemporaries, and keeps it near the top of any chipmusic aficionado’s hit list of all-time greats to this day.

The Commodore 64 Synthesizer Sessions Deluxe are a unique collaboration between Rhythmic Robot and those nice people at Bedroom Producers’ Blog. Tomislav, the guy behind BPB, is an avid SID chip enthusiast, and spurred on by the annual KVR freeware competition he pulled out all the stops to sample a treasure trove of crunchy Commodore patches. There are 30 patches in the library, sampled from three different iterations of the Commodore 64 home computer. Mongo rolled up his coding sleeves and put a Kontakt UI on the front, and the result is a neat little library of old-school lo-fi grit, with enough flexibility to let you roll your own SID sounds into the bargain.

This library is different from our usual products in that it’s a collaboration. All our other instruments are sampled right here in the lab, by us; but we made an exception in this case because it’s fun to join forces in a freeware competition!