The third demo is by our friend Trigg, whose sound page is here 🙂

“It’s like you’ve discovered a treasure-trove of battered yet unknown drum machines… At the maximum, it’s as angry and aggressive as the gnarliest pit bull on a string. For conjuring drums with attitude the Grit knob is going to see lots of maxed-out action!” – Sound on Sound magazine

“Grit Kit lets you blend Transient, Waveform and Noise layers for each kit element. Choose between 8-bit, 12-bit and 13-bit per layer. The Grit knobs combine downsampling distortion with overdrive, and the end result is an impressively tough drum machine!” – Computer Music magazine 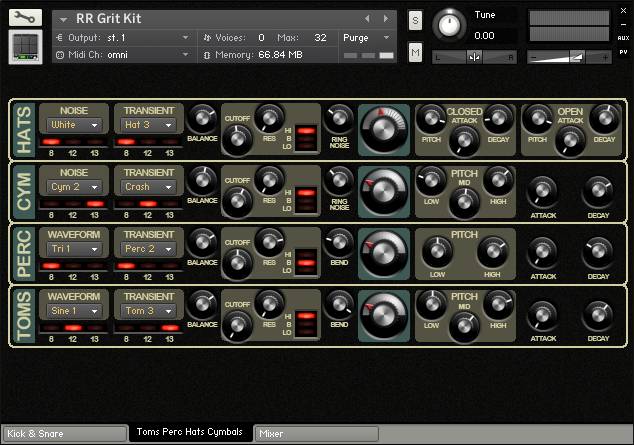 Imagine having a hugely powerful, flexible and inspiring analogue drum synth in your studio: one that allows you to create classic tones from the past or sculpt entirely new contemporary sounds easily and seamlessly. Then imagine that it’s been wired in to a choice of classic, old-skool hardware samplers, so that you can record its output through their signature electronics, pushing their A-to-D converters just as far as you want, to get that meaty thud and crunch to the low end, and crackly sizzle to the high end that only vintage samplers can impart to a beat. Imagine doing away with their cryptic interfaces in favour of a single knob that allows you to dial in precisely how much of their character you want stamped on your sound.

This is what Grit Kit puts at the heart of your DAW. Inspired by the way that hardware samplers of the past just make beats sound better, Grit Kit is an analogue drum synthesiser’s brain surgically welded to a hardware sampler’s heart. It’s as easy to program and create with as any Vermona-style analogue drum synth, but can sound like an Akai, or a Mirage, or an EPS, just at the flick of a switch and the twist of a dial. It gives you an entire drum kit – kick, snare, open and closed hats, three toms, three cymbals, and two percussion pieces – all freely editable, and all ready to jump to life with the weight and power of yesterday’s sampler technology…

“The quirks of the machines concerned are rendered exactly ‘as-is’… the hiss component is well deserving of inclusion as, combined with the limiter, it helps to create an impression of the kind of wonky, breathy sample loops often obtained from old analogue drum machines”  – Sound On Sound magazine review

To see how that magic’s possible, let’s take a look at what makes Grit Kit pump. Creating a sound is dead simple. Say you want to roll your own killer kick drum. Start by selecting a basic Waveform to act as the core of the sound: let’s have a simple sine wave. Or a triangle, or pulse, or square, or variations on these. Then add an attack Transient to give your sound some definition – one of a whole selection taken from revered classic analogue drum machines of the past. Tweak in just a little Noise – seven different flavours. Balance these components together to get the sound you want. Dial up some distortion if you like, and tailor the Attack and Decay to get something tight but with enough presence to hit your audience in the chest. Rope in the multi-mode resonant filter to sculpt the frequency response until it’s just how you want it. There, your kick is done, and it sounds pretty damn cool. You’ll find that the selection of Transients, Waveforms and so on changes intelligently depending on which kit piece you’re editing, so the Hats have plenty of hat, ride and crash cymbal Transients to choose from, whereas the Snare ditches these in favour of – you guessed it – snare (and kick, and tom) transients. Hats and Cymbals can access two kinds of Noise simultaneously; Toms have a Bend control but Cymbals don’t… basically, every kit piece is tailored from the start to allow you to dial up sounds that just work, quickly and powerfully.

But that’s only half the story. Twinkling all over Grit Kit’s interface are little LEDs labeled 8, 12, 13. These let you select which source waves are used to create your kick (or snare, or hats, or toms… you get the idea). Click on the 8 to get the sound of the 8-bit Ensoniq Mirage, one of the first readily available studio samplers, an little legend in its own right. Or click 12 and instantly you’re rewarded with the presence and grunt of the 12-bit Akai S950, still revered as possibly Akai’s best-sounding hardware sampler (the crown’s contested between the S950, the S900 and the MPC-60 – but the S950’s convertors may well have the edge). Or switch up to 13 for the full 13-bits of the Ensoniq EPS, a performance sampler with a real mellow warmth to its tone. With a couple of clicks you can have your kick sounding like it’s been run through any of these classic pieces of studio kit.

This is because we sampled each and every Waveform, Transient and Noise sample into the real hardware machines, here in the Rhythmic Robot lab. Every sound Grit Kit produces has run though the circuitry of a classic hardware sampler, and come out the stronger for it.

So it’s the work of a moment to dial up a snare that sounds like it’s come from a Mirage, or a crash cymbal with the tonal character of an EPS. But you can go one step further, and have your attack Transient coming from the Akai, your body Waveform coming at you in raw and fuzzy 8-bit form, and a dash of pink Noise with the EPS’s signature high-frequency warmth. Mix and match and tailor your drum sounds until they’re exactly how you want them, playing to each sampler’s strengths, digging into their hidden depths, in a way that would be an impossible pipe-dream if you had the real hardware in front of you.

And then it’s time for the best bit of all. Because when we sampled our building-block waves into our hardware samplers, we didn’t just do it once. We did it eight times, starting off with a studio-perfect sample that maximises the audio quality of the source sampler… but then continuing with seven more samples that progressively push that sampler further and further, driving it beyond the limits of what it’s supposed to do, until it rewards us with all the crunch and grit we know you want. Here’s how… 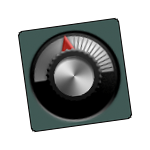 Right at the heart of Grit Kit are those big, turquoise knobs: one for each kit piece. These are the Grit knobs, and they give you instant access to Grit Kit’s most powerful feature: on-demand abuse of the source samplers. With the Grit knob fully to the left, you’re hearing your selected sampler at its very best: meticulously gain-staged for maximum resolution and frequency response. There’s still a wonderful difference in character between the three, but it’s the difference of three machines doing what they were supposed to do, to the absolute best of their abilities.

Start turning the knob, though, and all that changes as we start to rope in two old-skool producers’ tricks for bringing more character to the sound. The first is simply transposing the samples down. Old samplers don’t interpolate like modern ones do; they just slow the sample the lower you get on the keyboard, bringing in compromises of frequency response and bitstream fidelity that their designers couldn’t work around and which – on drums particularly – just sound cool. Like abusing a compressor to bring out its character, this gives sounds an instant hit of extra power, weight and crunch. Because we didn’t want you to have to deal with the confusion of samples suddenly dropping down in pitch, though, we first pitched our sounds up by a corresponding amount in state-of-the-art audio editing software before pitching them down in the hardware, so that turning the Grit knob up doesn’t mess with your kit pieces’ pitch – it just delivers increasing amounts of character. 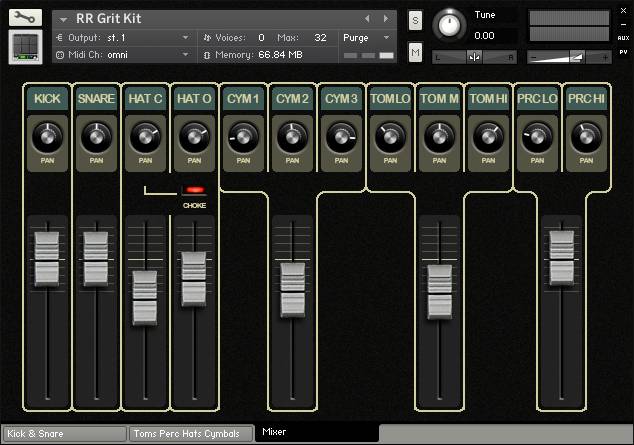 That’s what happens until halfway on the dial, anyway. Beyond the 12 o’clock position things take another turn entirely as we also start overloading the source samplers’ input stages. This brings first a subtle clipping, and then full-on digital distortion to the mix, going from warm and punchy to seriously aggressive as you work through to the right-hand end of the knob’s travel. This is where to go if you want your drums with a serious amount of attitude.

There’s a Grit knob for every kit piece, so you can tweak the amount of old-style character on a per-sound basis: tough and punchy for kick and snare, perhaps, but backing it off for the hats. Tailor the sounds to the way you want them, and create the perfect vibe for your track in no time.

Grit Kit isn’t just awesomely versatile: it’s awesomely responsive, too. Each kit piece responds to velocity so that creating more humanised beats is simplicity itself. But there’s a trick up its sleeve, in the form of the Velocity To Grit LED on the front panel. This little control disables the Grit knobs and instead maps incoming MIDI velocity onto both volume and the amount of Grit added to the sound. This puts dynamic, responsive drum kits right at your fingertips, bursting with character and pulsing with additional hardware saturation the more you lay into your playing.

Further controls take the realism of your hardware sampler sounds to a whole new level of accuracy. Switch in the sound of the output hiss of each sampler, adjusting its level to taste; it’s amazing how a touch of genuine output noise can help bind a beat together, especially if you set it pumping with the output limiter. This has both input gain (limiting amount) and release time controls, so you can dial in a little bit of buss-compression-style “glue” or go savage and have the whole beat pumping away. Finally, on the Mixer pane, you’ll find pan pots and level faders for all the kit pieces, allowing you to balance your dream drum kits perfectly. Closed hi-hats can be set to choke open hi-hats here, as well.

The end result of over 1200 individual samples, three classic vintage hardware samplers, and dozens of analogue drum waveforms is a true drum synthesiser: capable of generating sounds both classic and modern, in the style of the great analogue hardware drum machines of the past – 808, 909 and the rest – or totally fresh, new and contemporary, limited only by your imagination. And the real kicker is the ability to route those sounds through some of the best, most revered hardware samplers of the past, bringing in just as much of their crunch, magic and mojo as your track needs. Grit Kit – analogue meets digital, the old-skool way.

Grit Kit ships with a pack of 16 preset kits covering everything from tight studio kits to total sonic mayhem.

(All our Kontakt instruments require a full copy of Native Instruments Kontakt v4.2.3 or higher (including all versions of Kontakt 5). Kontakt Player is not supported: instruments will load, but will time out after 15 minutes. See the FAQ for further information.) You can read more about the Ensoniq EPS, Ensoniq Mirage and Akai S950 over on Vintage Synth Explorer.