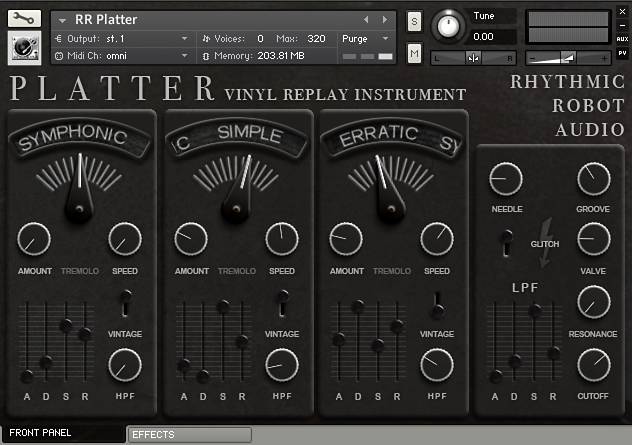 ‘Quite possibly RR’s weirdest instrument yet… for lovers of the strange and dusty, this is clearly a must-have.’ – Computer Music Magazine

Vinyl-based three-oscillator synth with switchable 1960s or 1910s-vintage waveforms and 35 preset patches • Adjustable needle-down and background crackle sounds for 78rpm authenticity • Recall the flavour of the Birotron, Optigan and other Mellotron-era replay instruments 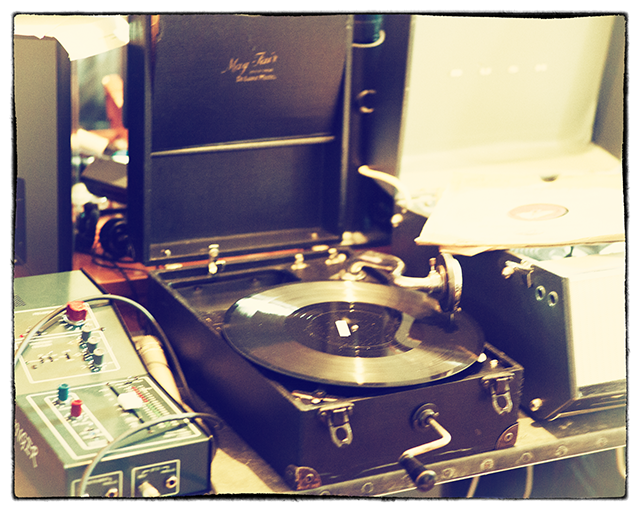 Possibly our gnarliest, grungiest instrument yet, Platter is a kind of bastardised string synth hybrid, taking as its starting point a variety of synth waveforms but reimagining them as built into a vinyl-based replay machine. If a Solina and an Optigan were abandoned in an attic for fifty years and had babies, this is what they might sound like…

The core premise is quite a simple one: we took a variety of synth waveforms, but with a hefty bias towards the string-synth end of the spectrum, and had them pressed to custom dubplates by our local vinyl workshop. We deliberately didn’t go down the standard route of saw, sine, square for this one; instead, there are a couple of “synth staples” but also a batch of more orchestrally-themed sounds taken from old string synths and other more complex instruments. So instead of choosing “Pulse” or “Saw”, you’ve got things like “Symphonic”, “Baroque”, “Choral” and “Elegiac”. Not sure what that’s going to sound like? Try it and see 🙂

We then replayed these waves off their vinyl LPs on two vintage machines: a 1960s Dansette, and a 1910 hand-cranked portable 78 player complete with steel needle and built-in horn. The result of that process is two completely distinct sets of waves, one more-or-less true to the original sounds (but with a bit of crackle and wobble) and the other a savagely bandwidth-limited, thoroughly antique tone that warbles merrily along whenever you click in the oscillator’s Vintage switch.

The interface is where you take those starting points to the next level. You get three oscillators to play with and blend, each of which is freely selectable between the 60s wave and the Vintage version. Each wave has its own amp envelope and tremolo control (which can be set super-slow to allow the sound to fade in and out almost subliminally) plus a very useful high-pass filter. Dial this up high enough and you’re left with very little except hiss and crackle, which can be a great way to add a bit of Vintage character to a tone mainly comprised of two 60s-era waveforms on the other two dials. 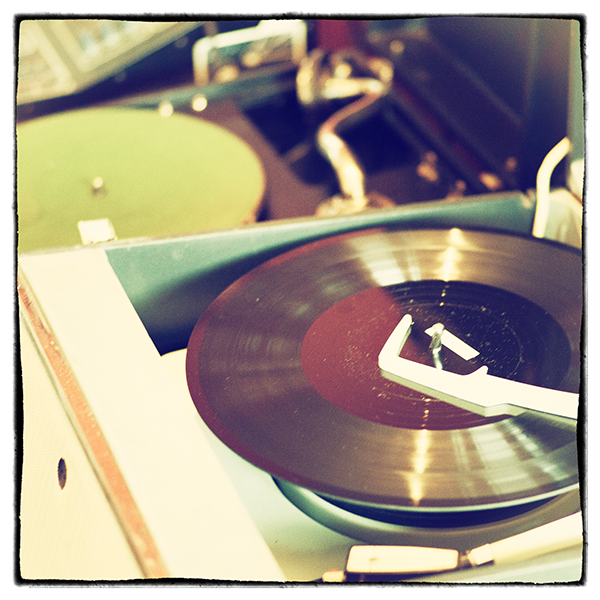 On the right-hand end there’s a block that ties all three oscillators together using a common Filter circuit (complete with envelope), Valve saturation to push the sound harder, and the twin Needle and Groove controls. Needle controls an initial needle-down thump and simulates engaging the platters whenever you hit a key. Groove is a constant, 78rpm cyclic crackle sampled from the 1910 turntable and plays as long as you hold a note. Judicious use of these two controls can really help simulate the behaviour of an ageing Optigan-style machine. Plus of course there’s the Glitch control, for instant random patch creation (with a bias towards musically-useful patches). Click it and get immediate fresh inspiration!

On the rear panel are echo, reverb and rotary speaker sims plus modelled amp cab, all of which can take the sound in useful new directions very quickly and easily.

Platter is, fairly obviously, not a recreation: it’s an entirely original and deliberately oddball instrument. It excels at vintage-themed soundscapes, black-and-white horror movie soundtracks, moody steampunky swells, background music for turn-of-the-century punting trips along the rivers of Cambridge with a Victrola playing in the bow… if you want to timetravel your tracks into another age, Platter is here for you.  Platter also plays nicely with others: try layering it with your patch of choice and then adjusting the HPFs so it doesn’t compete, and let it lend a sheen of vintage vinyl airiness to any tone you like. In combination or solo, this is very much the one to reach for when you want a nostalgic sepia filter over your lens!