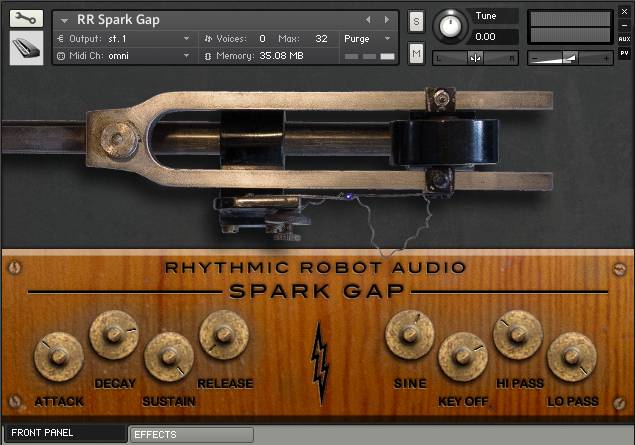 “Spark Gap continues RR’s honourable tradition of finding beauty in the old and the knackered… In common with all the RR instruments I’ve encountered so far, the sampling is clear, impeccable and 24‑bit; just what’s needed to reproduce noisy, nasty technology from the dark ages!” – Sound on Sound magazine

“Spark Gap is so creative and unique. I found myself writing with it as soon as I started the review. So many possibilities from such an interesting sample set. I don’t know what wavelength The Professor surfs on, but I just became a Rhythmic Robot fan.” – SampleLibraryReview.com 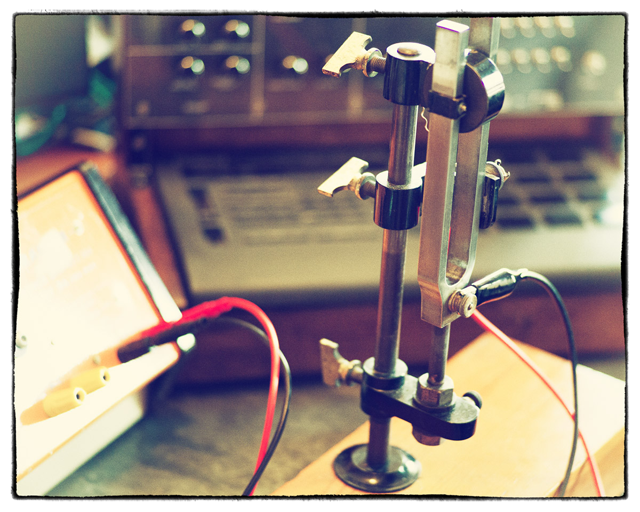 The source tones for Spark Gap come from a wonderful piece of scientific history: a vintage 1920s electrically-driven (or “maintained”) tuning fork. This bit of lab kit comprises a hefty brass fork bolted to a resonant box and fitted with a moveable pair of damping clamps plus a moveable electromagnet, and was used nearly a century ago to demonstrate the principle of the electromagnetic feedback loop. But while it may have been designed for the edification of young scientists, it’s first and foremost a sound-producing machine – which made it pretty much irresistible to us…

The “maintained fork” is an elegantly simple bit of kit. The magnet – the thick black disc – sits between the fork’s tines, dormant until current passes through it. That current is supplied via a pair of make-or-break contacts, one of which is attached to one of the two steel damping clamps (and so is effectively attached to the fork itself). The other is independently clamped. When they touch – or spark, which they do a lot – current passes instantly to the electromagnet, which becomes magnetic, and attracts the two steel damping clamps… thereby dragging one of the two make-or-break contacts away from the other, and breaking the circuit. The moment that happens, the current stops flowing; the electromagnet shuts off; the tines spring back; the contacts reconnect; the current starts flowing; the magnet switches on… and the process continues like that indefinitely, being “maintained” by the electrical current and the mechanical feedback loop, yielding a loud and theoretically stable tone which can be varied in pitch by adjusting the position of the electromagnet, clamps, and sparking contacts.

Basically, once you set it going, it never stops. Which is kind of cool. But what’s even more cool is that it sparks, crackles, makes bits of smoke, and at one point when we were sampling it, welded itself to itself and shorted out the circuit-breakers in our lab-grade power supply. That was really cool, and smelt nice, too. 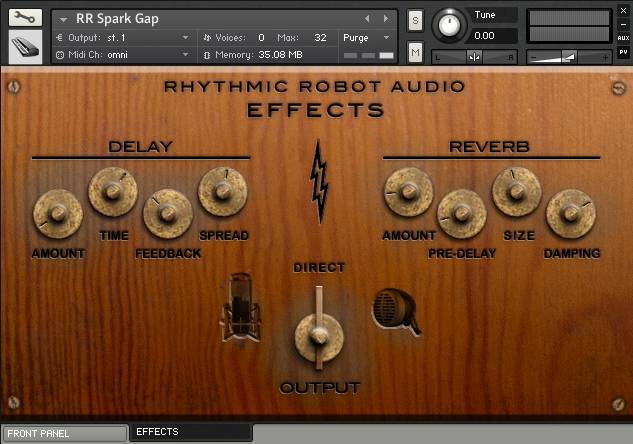 Feed the fork enough DC current, and “tune” it with an arcane series of adjustments to its mechanics, the size of the spark gap between the make-or-break contacts, and the precise voltage of the power supply (it’s picky… most of the time it seems to like about 4v, but once we had to feed it 12), and you get an astonishing raw, rattly, crackling, sparking sound just begging to be played polyphonically. Where a conventional tuning fork produces as near as makes no odds a pure sine wave, this amazing laboratory antique is nowhere near as polite: its constantly drifting, buzzing, resonating pulse sometimes takes in strange overtones, sometimes gets contaminated with mechanical rattlings as screws shake loose, and is constantly – but erratically – reinforced by the sound of the spark gap arcing. In fact, we were so taken with those little background crackles that we decided to call the instrument “Spark Gap” in their honour.

Spark Gap comes with a set of controls carefully chosen to complement its vintage nature. A standard ADSR envelope allows you to sculpt your tone, while the Sine knob controls the level of a pure sine wave which can be added to the tuning fork tone to reinforce its fundamental. High- and Low-pass filters affect the fork tone only, allowing you to craft this and then blend it with the Sine; this gives access to a very wide range of musically usable sounds, as you can go for a full-on vintage crustiness (by dialling back the Sine and leaving the filters off) or get a very subtle degree of crackle into an otherwise well-behaved wave (by, say, using the Sine as the main oscillator and severely high-pass filtering the tuning fork tone so that just a hint of it comes through). 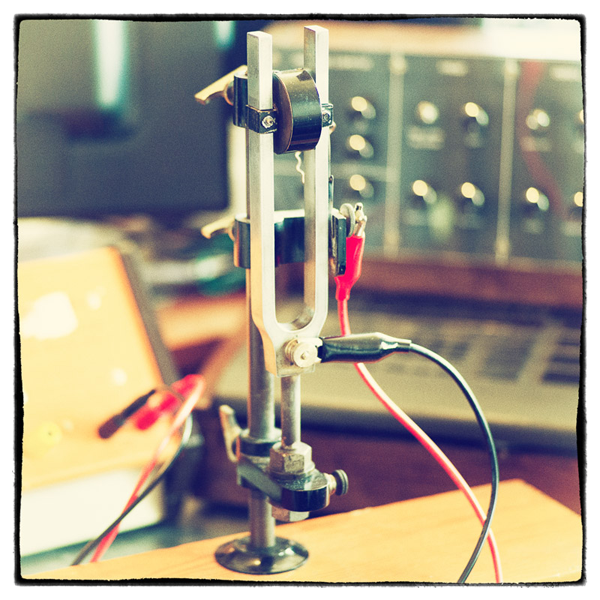 The Key Off knob adjusts the level of a random pool of buzzes, thumps, crackles and chirps which the fork makes when manually damped: these play when you release a note and add considerably to the charm of the sound. By combining a slow-ish attack with a medium-level Key Off setting, you can get a convincing “bowed” sound not a million miles off an E-Bow guitar tone – if electric guitars and E-Bows had been invented in the 1920s.

Round the back there are controls for stereo Delay and Reverb, both of which are great for thickening the sound or adding sonic breadth. There’s also a simple Output switch, which ropes in convolved impulse responses of a studio condenser mic and a vintage-style graphite mic to give a subtle but pleasant extra dimension to the sound.

Spark Gap excels at conjuring up visions of the past. It’s an eerie, sometimes spooky sound which wouldn’t be out of place in a grainy black-and-white horror movie. It also lends itself naturally to sound design, producing washes and soundscapes with a unique “bite” of crackle and tension. Perhaps best of all, you don’t have to deal with the possibility of it shorting out your studio and setting fire to your microphones.