All 12 PCM sounds from the Casio RZ-1 – plus a handful of bonuses! • A great retro 1986 sound which found its way onto countless Hip Hop and House tracks • Classic gritty 12-bit tone 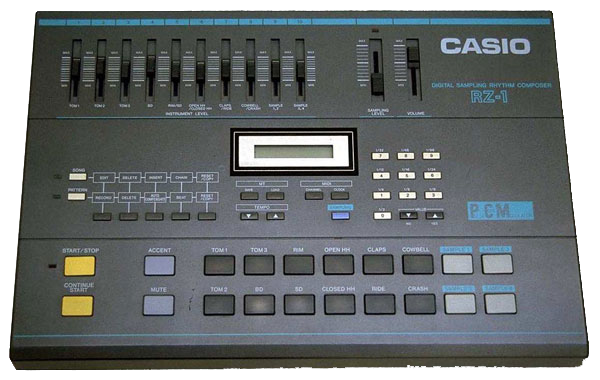 Continuing our obsession with 80s low-bit-rate sampling gear, let’s introduce the big grey slab that is the RZ-1. Casio’s built-like-a-brick RZ-1 was one of the early brigade of sampling drum machines, offering twelve onboard PCM sounds plus the opportunity for the user to sample their own sounds to four assignable pads. Admittedly, these pads only offered 0.2 seconds of sampling each, but there was the cool option of chaining all that sample memory together to get one, single, massive 0.8-second burst of sound. Bitchin’!

All right, the sampling time was pretty limited. But the sonic specs were better: 20kHz sampling frequency, which at least let some top end through, plus a fader-bank to allow you to balance the sounds, and a decent onboard sequencer to chain patterns together. The RZ-1 has a sonic signature all of its own: very brisk and crisp, with enough grit to slam through a mix but an undeniably lo-fi tone to its kit which has made it something of a cult hit among Hip Hop and House producers. Its attractions aren’t limited to those genres, though: any track with a bit of a retro, underground or electronic feel to it might find something to love in the RZ-1.

Our recreation takes multiple round-robin samples of the original hardware sounds, plus four little extras which we found living in the sample memory of the four user pads of the machine we scooped up from a studio sale. (We’re not going to tell you what they are.) It also brings our usual degree of user control to the panning and levels of the kit pieces, and allows velocity to control level if you’d prefer that – much more of a ‘humanising’ effect than the original Casio was capable of!

The standout sounds are, to our ears, the kick and snare. They’re tight (because of that limited sampling memory!), very punchy, and very gritty, the snare especially. They’re brimful of Asha – I mean, attitude, with a crispy crunchy vibe that pushes them right to the front of the mix. There’s also a nice surprise with the ride cymbal sound, which is often a drum machine weak spot, but on the RZ-1 is a neat little ting that works particularly well in busy patterns. You also get three toms (very 80s!), a crash (a bit short to be useful as a crash, but not bad as a kind of splash or China cymbal), open and closed hats, a cowbell and a rimshot to play with. All in all, there’s enough variety in the sounds to get quite complex rhythms going in short order, and enough punch to make sure the backbeat of those rhythms is right in your face. For a big grey slab of 80s sampling, reach for the RZ-1!