A little polysynth… built from Stylophones

“StyloSynth’s samples have a warm and pleasant tonality. Modern is rather bright and slightly distorted; Stacked is a pile of old Stylophones in some warped version of unison; and the Vintage setting is mellow and generally the most pleasant!” – Sound on Sound magazine

And, in fairness, perhaps they had a point. This one is a little weird. But it’s also good fun, unusual, and has a charm all of its own. StyloSynth is a nifty little 3-oscillator polysynth whose secret identity is that it’s built from a stack of vintage Stylophones. 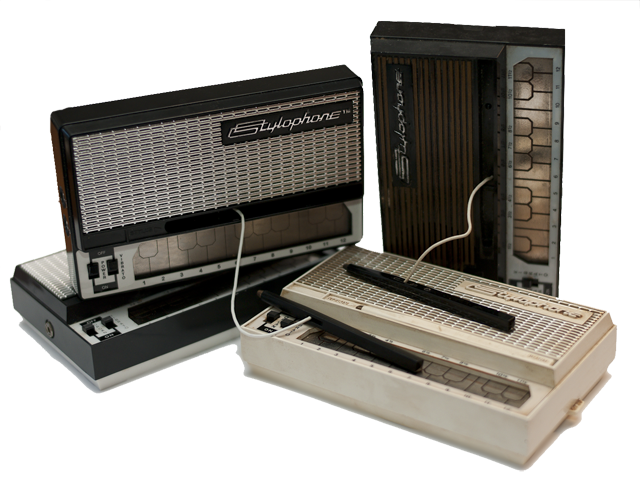 Everyone knows that the character and identity of any classic synth start with the sound of its oscillators: they’re the basic building-blocks of its sound. What’s not been known – until now – is that, in the dark, when they’re alone, every Stylophone dreams of being an oscillator in a massive analogue polysynth…

In the case of StyloSynth, those oscillators are sampled from all the Stylophones we could beg, borrow, or scrounge from car-boot sales. The “Modern” oscillator is a vicious-sounding square wave, sharply distorted, with a lot of buzzy overtones. The “Vintage” oscillator is a much mellower vibe from a classic 60s Stylophone which we chose for its rounded, woody timbre. And the “Stacked” oscillator is our answer to Roland’s “SuperSaw”: except that where they layered and detuned seven sawtooth waves, we just stacked up a bunch of Stylophones instead. It’s rich, thick, and luscious right out of the gate; add the other oscillators and you can start to redefine phat.

Each of the three oscillators can be adjusted in level to get a starting sound, which then passes through a dual-mode high / low pass resonant filter with ADSR envelope and LFO control of cutoff; a standard Amplifier envelope, again with ADSR; and a lush Chorus control.

An Oscillator Drift knob sets the amount by which the oscillators randomly vary in tuning from each other, accentuating an already vintage vibe from subtle to extreme. Finally, on the rear panel, a Spread control spans everything from full stereo width down to mono, to help you seat the StyloSynth in your mix with precision.

StyloSynth excels at pads, where its subtly detuned oscillators and vintage electronics really come into their own; but it can put in a sweet little lead sound as well, and some great grungy square-wave basses, too. (Crank up the resonance for a really boingy sound!) And of course it’s fully polyphonic, and the little pen thingy doesn’t break off.

StyloSynth: what Stylophones want to be when they grow up.